Moon Might Have Formed In Mere Hours, Shows Most Detailed Simulation Created By NASA

Moon might have formed in just a matter of hours, says NASA according to its new theory produced using a high-resolution simulation of the Earth's impact. 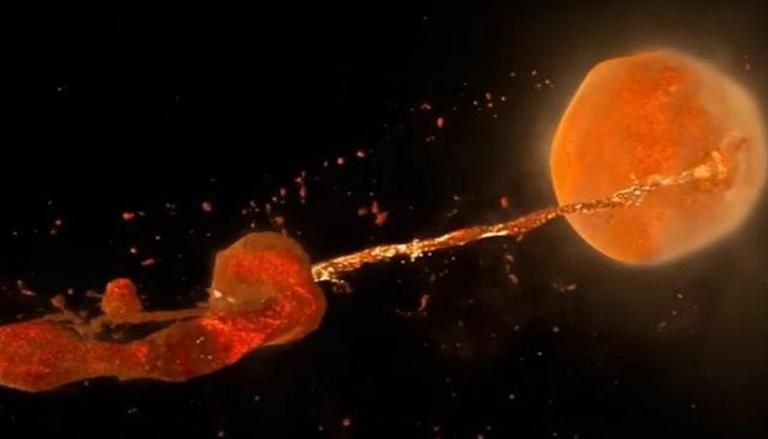 
The origin of the Moon is still a puzzle for astronomers as they have found no concrete evidence about how exactly its formation occurred. According to existing theories, a Mars-sized object named Theia collided with Earth and the resulting debris coalesced into the Moon over months or years.

However, a simulation of the event created using NASA’s supercomputer has shown that the Moon might have formed in a matter of just a few hours after the matter resulting from the impact was released directly into the Earth’s orbit.

The making of our Moon...

A new @NASA simulation shows the Moon may have formed much faster than previously thought (over a matter of hours!) following the collision of a Mars-sized object with Earth.

NASA shares most detailed simulation ever

The US space agency says that the simulation created for this research are some of the most detailed of their kind, operating at the highest resolution of any simulation run to study the planetary impacts. Scientists went for high resolution because unlike lower-resolution simulations, they do not miss out on important aspects of such collisions and allow them to see new behaviors emerge.

"This opens up a whole new range of possible starting places for the Moon’s evolution,” said Jacob Kegerreis, a postdoctoral researcher at NASA’s Ames Research Center and lead author of the research published in The Astrophysical Journal Letters. "On top of the big eye-opener that standard resolutions can give you misleading answers, it was extra exciting that the new results could include a tantalisingly Moon-like satellite in orbit."

Scientists believe that the simulation opens up new possibilities for the Moon's evolution and will help them understand the intertwined history of Earth and the Moon. Vincent Eke, a researcher at Durham University and a co-author says that learning more about the origin of the Moon could uncover new clues about the evolution of our own planet. Analysis of lunar samples brought to Earth has revealed that the Moon has very similar isotopic signatures to rocks from Earth than those from Mars or anywhere else, and this supports the theory of the Moon emerging from our planet.

NASA now has a new theory that, it says, offers a cleaner and more elegant explanation for issues with other theories. It also believes that analysis of future lunar samples brought back to Earth would confirm more about how the Moon exactly formed.