NASA has released new images produced using data from its Chandra telescope and the Webb telescope of the farthest cosmic objects. 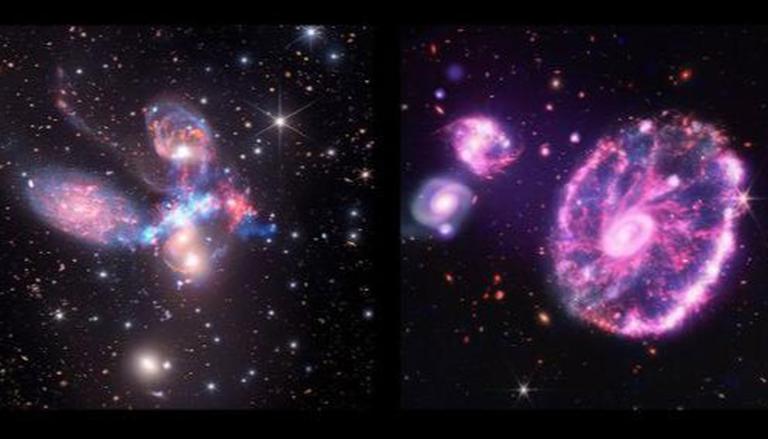 
Two of the best space telescopes have assembled to present an entirely new perspective on the farthest objects in our universe in deep space. NASA has shared new pictures produced using data from the Chandra X-ray telescope and the James Webb Space Telescope, the world’s most powerful observatory. The pictures feature nebulae and galaxies which were among the first photos captured by Webb.

Chandra & Webb, together at last! Webb's infrared abilities combined with Chandra's X-ray vision underscore how the power of any of NASA's telescopes is only enhanced when joined with other instruments, both in space and on the ground. More: https://t.co/IzKkaTncSX pic.twitter.com/IYtoz2Tgcx

Astronomers have combined the X-ray data of the Chandra telescope with the infrared data collected by Webb since its commissioning phase was over. Featured in these images are the Stephan’s Quintet, the Cartwheel Galaxy, the galaxy cluster SMACS 0723 and the Carina nebula. Let us break down each of them.

READ | As Webb telescope spots Neptune's rings, NASA recounts exoplanet with over 30 of them

Stephan's Quintet as seen by Webb and Spitzer in infrared, plus Chandra in X-ray light: pic.twitter.com/qi807zRTBu

The Stephan’s Quintet is a group of four galaxies accompanied by a fifth at a distance and all of them are roughly 290 million light-years away. The colours red, yellow, orange, green and blue were captured by Webb and they represent the interaction between the galaxies and the sweeping tails of gas and bursts of star formation. According to NASA, combining this with Chandra’s X-ray vision has uncovered a shock wave that heats the gas to tens of millions of degrees, as one of the galaxies passes through the others at speeds of around 3.2 million km per hour. Interestingly, the picture also has traces of the colours red, green and blue from the now-retired Spitzer Space Telescope.

The Cartwheel Galaxy as seen by Webb in infrared light and Chandra in X-ray light: pic.twitter.com/jSewlsJvcq

The Cartwheel galaxy is located roughly 500 million light-years away and it got its shape after a collision with a smaller galaxy. The colours blue and purple are colours from the Chandra observatory and they represent the superheated gas, individual exploded stars, and neutron stars and black holes pulling material from companion stars. On the other hand, the colours red, orange, yellow, green and blue from Webb’s infrared view and highlight the Cartwheel galaxy and two smaller companion galaxies with more distant ones in the background.

Last but not least, here are the "Cosmic Cliffs" of the Carina Nebula, as seen by Webb in infrared light and Chandra in X-ray light: pic.twitter.com/gordNpNbHG

Lying about 7,600 light-years away in the southern constellation Carina, the Carina Nebula and its cosmic cliffs have been spotted with stars with ages between one and two million years old. The shades of pink are from Chandra’s X-ray vision and the colours red, orange, yellow, green, cyan, and blue are from Webb's images.

NASA says that young stars are much brighter in X-rays than old stars, making X-ray studies an ideal way to distinguish stars in the Carina Nebula as compared to those in the Milky Way. It further pointed out that the diffuse X-ray emission in the top half of the image is resulting from the gas being emitted by the three hottest, most massive stars in the star cluster, which are out of Webb’s field of view.

You might remember galaxy cluster SMACS 0723 as the very first Webb image unveiled! Here it is as seen by Webb in infrared light plus Chandra in X-ray light: pic.twitter.com/Bg5eeIEfSu

This was the first ever image released by Hubble and it features some of the oldest galaxies ever known. Located about 4.2 billion light-years away, this cluster contains hundreds of individual galaxies and the blue mist in the middle is from Chandra’s observations. According to NASA, it represents the vast reservoir of superheated gas which have temperatures of tens of millions of degrees and can only been seen in X-ray. Interestingly, these gases are said to have a total mass of about 100 trillion times that of the Sun making them several times higher than the mass of all the galaxies in the cluster.