NASA's Artemis I Moon mission will see the SLS rocket liftoff with the Orion spacecraft at 6:30 pm IST on August 29 kickstarting the Artemis program. Read more. 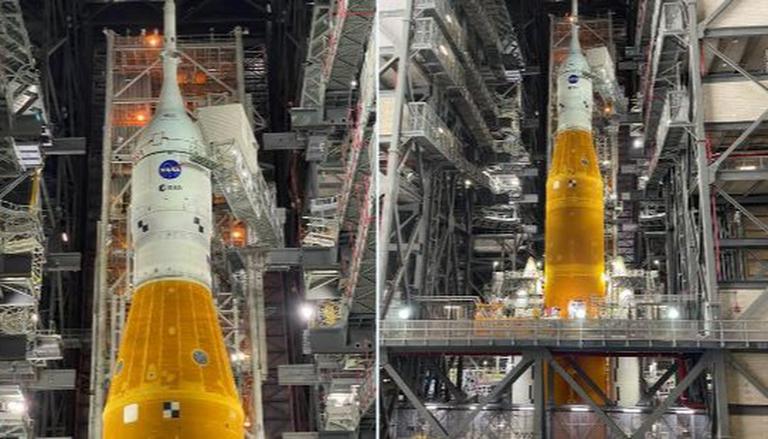 
Jim Free, NASA’s Associate Administrator for Exploration Systems Development, shared a major development that took place ahead of the uncrewed Artemis I Moon mission targeted for August 29. The official revealed that all the work platforms surrounding the integrated Space Launch System (SLS) rocket and the Orion spacecraft in the Vehicle Assembly Building (VAB) have been retracted.

This is a major step towards the rollout of the rocket to the launch pad at the Kennedy Space Center, which is scheduled for 6 p.m. EST on August 18 (3.30 a.m. IST on August 19).

Nearly all the work platforms have been retracted that surround @NASA_SLS and @NASA_Orion as @NASAGroundSys makes the final preparations to the integrated #Artemis I stack ahead of a targeted roll-out on August 18. More of the progress on the blog: https://t.co/7BPfRUvcfH pic.twitter.com/1Z9XL5SNH1

According to NASA, the mission team worked on the second part of the Flight Termination System (FTS) of the SLS rocket this week after completing the first part earlier this year. The agency says that all rockets are required to have FTS that the Space Launch Delta 45 can use to terminate the flight if necessary. "Once the flight termination system testing is complete, teams will complete final closeouts on SLS and Orion before it rolls out of the Vehicle Assembly Building", NASA said in its statement.

Last week, the agency revealed that it received the green light for the SLS rocket's rollout on August 19. Next week, the rocket will be hauled on a six-kilometre-long journey from the VAB to Launch Complex 39B at the Kennedy Space Center.

Artemis I would kickstart NASA's Artemis Program which aims to land humans on the Moon again in 2025. Named after the Greek goddess Artemis, who is the twin sister of Apollo, the program would also see the first woman and person of colour walk on the lunar surface. If everything goes according to plan, the SLS rocket would launch the Orion spacecraft at 6.30 pm IST and deploy it into a translunar orbit approximately 90 minutes after the launch.

READ | Artemis I: All three 'passengers' installed inside Orion spacecraft bound for the Moon

NASA said that Orion will fly farther than any spacecraft built for humans has ever flown and will stay in space longer than any ship has done without docking to a space station. Read more about the mission profile here.