The rocket is being touted as the most powerful one ever built and will make its debut flight under the uncrewed Artemis I launch scheduled for early 2022. 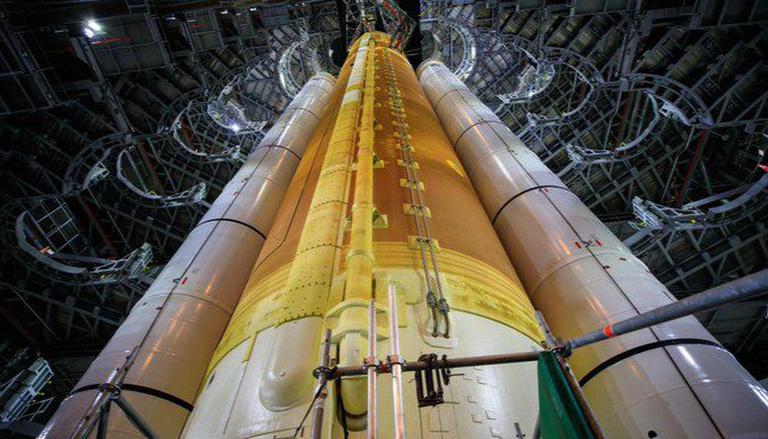 
NASA has announced to roll out its Space Launch System (SLS) rocket, which will carry humans to the Moon under Artemis missions, in February 2022. The rocket is being touted as the most powerful one ever built and will make its debut flight under the uncrewed Artemis I launch scheduled for the first quarter of this year. According to NASA, the rocket and the spacecraft will be collectively moved to Florida-based Kennedy Space Center's Launch Pad 39B although the exact date of the rollout is yet to be decided.

The launch of #Artemis I is just the beginning!

As teams prepare Artemis I for its debut flight, @NASA and its partners are building the rocket for Artemis II, the first crewed Artemis mission, as well as manufacturing major parts for Artemis III, IV & V: https://t.co/7in7N1aBif pic.twitter.com/GPggezaH2V

Fitted with two solid rocket boosters and four RS-25 engines, the SLS rocket is capable of producing over 8.8 million pounds of thrust to launch each Artemis mission to the Moon. John Honeycutt, SLS program manager said in the agency's statement-

The Space Launch System team is not just building one rocket but manufacturing several rockets for exploration missions and future SLS flights beyond the initial Artemis launch.

He added that the Artemis I mission is just the first in a series of human attempts to reestablish our presence on the Moon and said the SLS rocket's capabilities might even expand our exploration throughout the solar system. It is worth mentioning that the engineers are also manufacturing and testing major rocket parts for Artemis missions II, III, IV and V, all of which will be crewed.

SLS chief engineer, John Blevins, said as per NASA, "The Space Launch System is a highly capable launch vehicle purposely designed and rigorously tested to safely transport people, large cargo, and flagship science missions to deep space destinations". The agency revealed that engineers are currently developing one of the rocket's components called the Exploration Upper Stage (EUS) will carry as much as 83,000 pounds of cargo to the Moon, a capability that is 70% higher than any existing rocket.

More on Mission Artemis I

The mission will be an uncrewed one where NASA will launch a manikin, a few lego toys, and even Amazon's voice assistance Alexa to the Moon. During this mission, scientists will collect the data gathered during the flight, including the launch stress endured by the manikin which will then be used to assist astronauts in subsequent Artemis missions.

READ | From DART to Artemis; NASA's most anticipated space projects set to launch in 2022