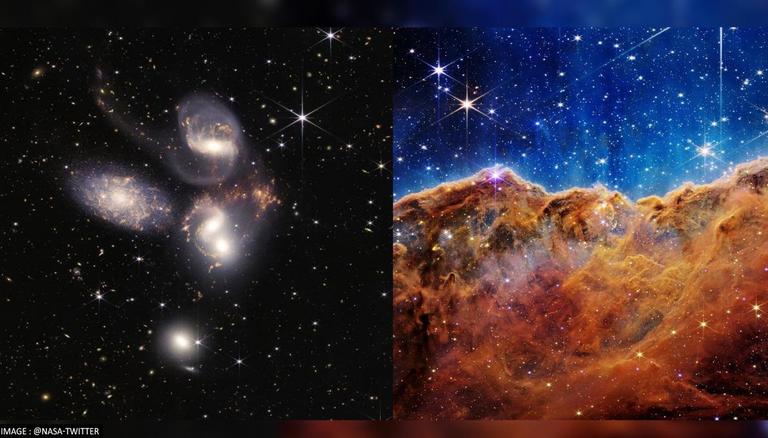 
The wait is finally over as NASA and its partners-- the European Space Agency (ESA) and the Canadian Space Agency (CSA)-- have released five of the James Webb Space Telescope's first infrared images of the universe. The images along with the spectroscopic data were released during the live event which began at 8 pm IST at NASA's Goddard Space Flight Center. Notably, the new pictures come just hours after US President Joe Biden unveiled one of the images featuring the galaxy cluster SMACS 0723 at 2:30 am today.

The exoplanet WASP-96 b

Clouds on another world. @NASAWebb captured the signature of water on giant gas planet WASP 96-b, which orbits a star 1,150 light-years away. For the first time, we've detected evidence of clouds in this exoplanet's atmosphere: https://t.co/63zxpNDi4I #UnfoldTheUniverse pic.twitter.com/f3HOX0HKis

The exoplanet WASP-96 b was Webb's second target and thanks to the world's most powerful observatory, scientists have captured the distinct signature of water, along with evidence for clouds and haze, in its atmosphere for the first time. According to NASA, this is the most detailed evidence of the presence of specific gas molecules that was captured based on tiny decreases in the brightness of precise colors of light.

This exoplanet lies 1,150 light-years from Earth and is mostly composed of gas. As mentioned above, it is an extremely hot world because of its tight orbit around its star, with a year lasting just 3.4 days.

Next up is the galaxy group Stephan’s Quintet wherein five galaxies are seen in exquisite detail. With Webb, the astronomers peered deep into the galaxy group’s thick dust to capture huge shockwaves and tidal tails. The shock waves are being generated by the galaxy NGC 7318B, which is smashing through the cluster. “The information from Webb provides new insights into how galactic interactions may have driven galaxy evolution in the early universe”, NASA said in its statement.

Located 290 million light-years away from Earth, this compact group was discovered 1877 and according to NASA, four of its five galaxies are locked in a cosmic dance. Interestingly, this new image contains over 150 million pixels and covers about one-fifth of the Moon’s diameter.

Some stars go out with a bang. In these images of the Southern Ring planetary nebula, @NASAWebb shows a dying star cloaked by dust and layers of light. Explore this star's final performance at https://t.co/63zxpNDi4I #UnfoldTheUniverse. pic.twitter.com/dfzrpvrewQ

Webb also observed the Southern Ring Planetary nebula, an entity located nearly 2,000 light-years away from our planet. This new image shows a dying star, which is cloaked by dust and is sending out rings of gas and dust for thousands of years in all directions. Thanks to Webb's exceptional infrared capabilities, this is the first time astronomers have observed the dying star in the nebula's center and the dust it is covered in.

The fifth and final images features the Carina Nebula, a stellar nursery which has been observed in the most detailed form ever. Webb’s Deputy Project Scientist Amber Straughn explained that the picture depicts the nebula’s star-forming region called NGC 3324 and many of the stars and the areas of starbirth here have been photographed for the first time. The highly-detailed picture has also highlighted extremely massive, hot, young stars in the nebula which have been blowing out intense ultraviolet radiation and stellar winds.

Called ‘cosmic cliffs’, this three-dimentional picture of the nebula has a gaseous cavity at its ‘mountainous’ edge where the tallest ‘peak’ is about seven light-years high. This star-forming region lies about 7,600 light-years away in the southern constellation Carina and is listed among one of the largest and the brightest.