Is Chris Paul playing tonight vs Lakers? Here is the Phoenix Suns' veteran star injury report before the upcoming playoffs Game 2 in Phoenix. 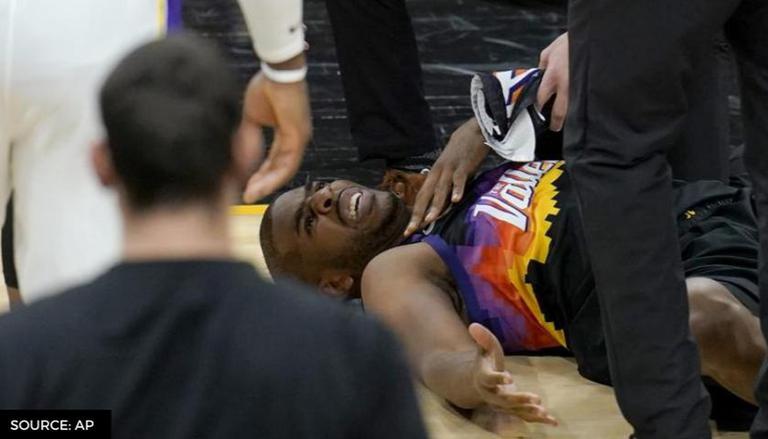 The Phoenix Suns managed to dominate the court and beat the Los Angeles Lakers to bag what was their first playoff win in a decade. The Lakers, despite having LeBron James and Anthony Davis back on the court, failed to make overpower Devin Booker – who exploded on the court with 34 points in the 99-90 Game 1 win. Chris Paul, however, gave the fans a scare with a shoulder injury. As a result, fans have queried - 'Is Chris Paul playing tonight?' and the status of the Chris Paul injury.

As per the latest Chris Paul return reports, he should be ready to play against the Lakers. Game 2 of the Lakers-Suns playoffs series is scheduled on Tuesday, 10:00 PM EST (Wednesday, 7:30 AM IST) at the Phoenix Suns Arena in Pheonix. Apart from Paul, no other player seems to be sidelined for either team.

Chris Paul return: When is Chris Paul coming back?

Chris Paul on if he will be good for Game 2: "Absolutely."

During the game, Talen Horton-Tucker tried for a layup, missing. LeBron James aimed for a rebound and ended up making contact with Paul. The 36-year-old ended up colliding with a backtracking Cam Johnson, falling down onto the court. The Suns' medical staff later announced a right shoulder contusion. Paul was on the floor for one whole timeout, before he made it to the locker room.

That being said, Paul was back into the game after sitting out for some time. Fans worried about Paul's status for game two, turning to social media to discuss the injury. Thankfully, Paul assured everyone that he will be "absolutely" ready for the upcoming game. However, he was indeed worried about the injury, wondering if it could have been a little bit more serious.

"I just remember I felt 'Uhh!' I heard like a crack, or whatever," Paul said after the game. He even referred to Kobe Bryant speaking of injuries, and how random they are. "In the thing Kobe says, like, 'Injuries, sometimes you just can't control them. So, that was all that was going through my mind after the play I got hit".

After that slightly disappointing 99-90 loss, the Los Angeles Lakers will look to win Game 2 and level the score. The Suns, having maintained a top-seed throughout, are even more determined to win as a team. The Lakers remained aware of their shortcomings, especially as Anthony Davis spoke about their performance after the game.

"I missed a ton of shots ... we missed a ton of shots as a team," Davis said, having scored only 13 points, going 5-for-16 from the field. "We scored 90 points ... really 87 after that (Alex Caruso) three (pointer)". However, fans remain hopeful as one game with James and Davis in a series cannot determined their postseason.

James had 18 points for the team, shooting 6-of-13 from the field. With his experience in the NBA postseason, James remained sure of their team. "It gives me a real advantage to be able to dissect a team; you know what we did wrong in the previous games. Game 1 has always been a feel-out game for me".

"We did well (Sunday), but it's one game," Devin Booker said, aware of how carefully they have to tread. "No matter how much we won by, no matter how we played, Game 2 is going to be a whole different opportunity. It's obvious what (the Lakers) are capable of, and we just try to make it tough on them".