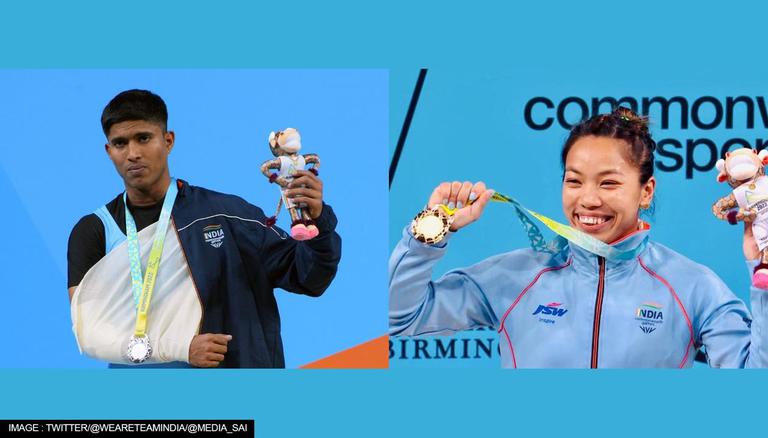 
The second day of the Commonwealth Games 2022 was a huge one for the Indian contingent with weightlifters bringing in four medals. The Indian weightlifting team won a gold, two silver and one bronze to end the day on a satisfying note. Mirabai Chanu competed in the 49kg weightlifting category and not only won the gold medal but also set a new Commonwealth Games record by lifting a total of 201 kg.

Apart from success in weightlifting, the Indian badminton team also had a good day on the court. Having started the day by crushing Sri Lanka in the first match, India finished the day with a win over Australia. It was a disappointing day for the Indian women's table tennis team as they crashed out of the competition in the quarter-finals. Here is a roundup of Indian results from Day 2 of the 2022 Commonwealth Games

The Indian weightlifting contingent opened India's medal count in the Commonwealth Games 2022 by winning four medals in one day. India's first medal in CWG 2022 was won by Sanket Sargar in the 55kg category. India doubled their medal count after Gururaja Poojary secured bronze in the 61kg category.

Mirabai Chanu not only defended her CWG tile in the 49kg category but also gave India their first gold in CWG 2022. Bindyarani Devi finished a very successful day for the Indian team by winning a silver medal in the 55 kg category with a stunning third attempt in Clean & Jerk.

However, Malaysia caused the major upset of the tournament by beating India in the quarterfinal. The defending champions were leading the contest 3-2 at one point before Manika Batra lost to a lower-ranked Ying Ho to take the game into the decider. Reeth Tennison also lost to the same opponent causing an early exit.

Indian women’s hockey team continued their unbeaten run after defeating Wales in their second encounter on Saturday. The Indian team went into halftime with a 2-0 lead but Wales scored one in the third quarter to set up very mouthwatering final quarter. Finally, the match ended 3-1 in India’s favour thanks to a second from Vandana Katariya in the fourth quarter.

Lovlina Borgohain headlines the boxing event on the second day opening her campaign against  Ariane Nicholson of New Zealand in the Round of 16 clash of the 70kg category. The Indian made lightwork of her opponent and advance in her bracket. Mohammad Husammuddin won his pre-quarterfinal clash against Amzolele Dyeyi of South Africa and will take on Bangladesh opponent in the 57kg category on Monday.

Indian badminton team were hardly provided challenge by Sri Lanka and Australia as they cruised to the quarterfinal stage. India started the day by beating Sri Lanka by 5-0 to win their second match in Group A of the Mixed Team event. The team ended the league stage by beating Australia 4-1 later in the day.

Nitender Singh Rawat recorded a time of 2:19:22 to finish 12th in the Men’s Marathon. He was 8:27 minutes behind the leader and more than three minutes slower than his personal best.

It was not a great day for Indian swimmers as Kushagra Rawat crashed out early in the competition after finishing last in the heat in Men’s 200m freestyle with a time of 1:54.56. Srihari Nataraj who qualified for the final of the men’s 100m backstroke event finished seventh with a time of 51.31s.

It was a mixed day for Indian squash players with Saurav Ghosal and Joshna Chinappa winning their respective matches, while Ramit Tandon and India’s youngest athlete Anahat Singh made an early exit. Ghosal entered the pre-quarters with 3-0 win over Shamil Wakeel of Sri Lanka. Ramit Tandon on the other hand suffered an injury and his opponent got a walkover in the first round.

Vishavjeet Singh and Dinesh Kumar were out of medal contention after finishing 18th and 19th in the men’s 4000m individual pursuit qualifying event. David Beckham finished fourth in his Men’s Keiren first-round heat while Esow Alben finished third in his heat. Both made it into the repechage round. Both of them finished second in their respective repechage heats as well.

India’s Ruthuja Nataraj and Pranati Nayak scored 46.250 and 43.500 to place 6th and 14th in the Women’s Team Final and Individual Qualification. The top 18 athletes would go on to qualify for the All-Around final.