3 Argentina Goals Ruled Out In 13 Mins: So Close And Yet So Far For Messi Vs Saudi Arabia 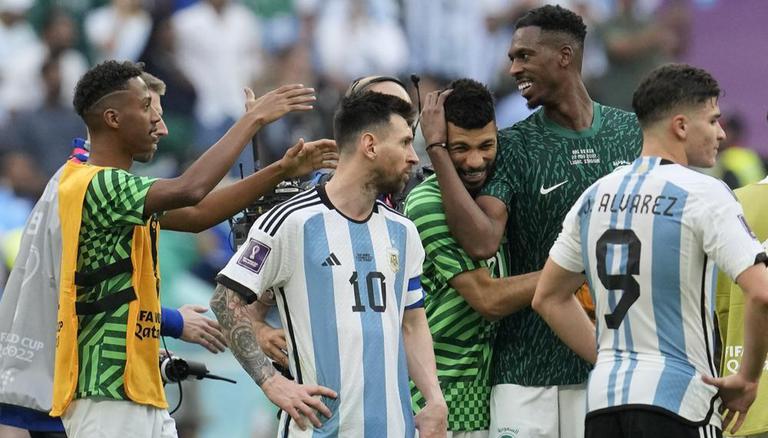 
Following world number three Argentina's shocking defeat in their FIFA World Cup 2022 opener against world number 51 Saudi Arabia on November 22, Lautaro Martinez's disallowed goal became one of the main talking points of the match. VAR disallowed the goal after Martinez was deemed offside for the tiniest of margins, much to the frustration of Argentine fans.

Argentina have 3 goals ruled out for offside

As seen in the image below, Lautaro Martinez's goal was ruled out after the upper part of his arm was deemed offside. Since players are permitted to score a goal using this body part, it seemed like the correct decision from the referees to rule out the goal.

The VAR image that ruled out Lautaro Martinez's goal for offside. pic.twitter.com/ygwAYcB78E

These were not the only goals ruled out for offside as Argentina had two other goals disallowed, all in the span of 13 minutes while they were in the lead. Martinez had another goal ruled out, while Lionel Messi also had a goal disallowed. With FIFA using a new semi-automated offside technology system, there have already been some contentious decisions seen in the 2022 World Cup.

Saudi Arabia pulled off one of the biggest FIFA World Cup upsets ever by beating Lionel Messi’s Argentina 2-1 on Tuesday, November 22. Messi’s quest to win the one major title to elude him got off to a shocking start and brought back memories of Cameroon’s 1-0 win over an Argentina team led by Diego Maradona in the opening game of the 1990 World Cup.

Goals by Saleh Alshehri and Salem Aldawsari in a five-minute span in the second half gave the Saudis their greatest-ever win. Heading into this tournament, Saudi Arabia had won only three games previously at the World Cup, and only one in the last 28 years before Tuesday's shocker over the two-time champions. This also rivals shocking results such as Senegal beating then-titleholders France 1-0 in the 2002 tournament opener and the United States stunning England by the same score in 1950.

With Argentina suffering a shocking loss in their first game of the FIFA World Cup 2022, they find themselves in an extremely difficult position. If the Albicelestes are to qualify for the knockout stages, they cannot afford to lose any of their two remaining games against Mexico and Poland.