The Barcelona chief has responded to a letter from his predecessor and has also asked the players to take another salary reduction to try and help the club. 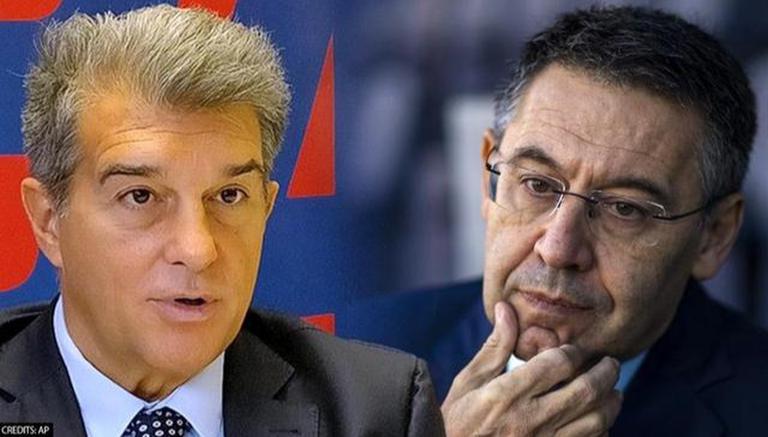 
FC Barcelona president Joan Laporta has come out and said that the club is in a €1.35 billion debt and that the current net worth of the club is negative €451 million. The club has been in financial turmoil for a while now and Laporta believes the cause of it is his predecessor Josep Maria Bartomeu who held the position of president for about six years from January 2014 to October 2020.

A few days ago Bartomeu has released an open letter to his successor in which he tried to absolve himself from the blame of the club's current situation while hitting out at Laporta's role in it. Bartomeu said that he and his Board had a way to avoid all the current turmoil that would have saved the club not only from their own decisions but the pandemic as well. In his long and detailed letter, Bartomeu also accused Lapotra of paying Neymar money he was not owed this summer. Bartomeu also said that while he was in office, the club reduced the wages of the players to help bring the finances under control.

"Why did you take that decision against the interests of the club?" asked Bartomeu of Laporta's board.

Laporta has now come out to respond to the many allegations that Bartomeu has accused him and his board of.

According to Laporta, who was speaking at a press conference organised by the club, when he took over as president, the club had taken a loan of €80 million from Goldman Sachs so that they could pay the players and employees' salaries.

"When we took over the club we asked for a bridge loan of €80m (£68m/$94m) granted by Goldman Sachs because we would not have been able to pay the salaries of players and employees. The previous board had received an advance of €79m (£67m/$93m) relating to 50% of La Liga's television rights and the banks charged it at 9% interest."

According to Laporta, the claims made by his predecessor were false and that millions in different kinds of bonuses and other variables were included in new contracts. He also explained the various entity controls that were bypassed.

“The reduction of wages by the previous board was not real. We have found those millions in different types of bonuses and variables included in the new contracts. We have found disproportionate payments to intermediaries, not agents, a transfer that cost €40m (£34m/$47m) and for a purchase premium we paid €8m and a sale premium of €2 million. A person was paid €8 million to find players in South America. The entity's controls were bypassed. Invoices were divided up, such as those of 'I3 Ventures' with 'Barcagate', invoices of 'Espai Barca', and of the debt contracted were also divided so as not to go through the Assembly."

He then said that Bartomeu's letter is 'full of lies' and said it is an 'exercise in despair'. Laporta also said that they have a salary bill that represents 103% of the club's total income which represents 20 to 25% more than their competitors. And he also mentioned the current debt and net worth of the club.

“Bartomeu's letter is full of lies. It obeys an effort to justify management that is unjustifiable. It is an exercise in despair. We have a salary bill that represents 103% of the club's total income. It represents 20-25% more than our competitors. No one is going to escape from those responsibilities. The economic situation is worrying and the financial situation is dramatic. Barcelona has a net worth of minus €451 million (£383m/$531m) and a debt of €1.35 billion (£1.15bn/$1.59bn)."

The current Camp Nou chief also touched upon Neymar's transfer to PSG and the refuted accusation placed by Bartomeu on Laporta that he had paid Neymar some amount this summer.

"He talks about Neymar," he added. "He says that we have forgone €16.7m. Another lie, it is not true. And you could remind Bartomeu of the damage that the Neymar case did to the image of Barca. Because it was an infinity of lies. When he sold Neymar for 222 million, they had already spent disproportionately. This triggered wages and amortisation."

Laporta has asked the players to take a second pay cut and also commended Pique for taking the salary cut.

"We are happy to have resolved with Pique the issue (of registering new signings)," he said. "To reduce salary is very admirable. In Kun's case, it is not yet resolved, but we expect other captains to act like Pique. The squad already reduced salaries due to COVID. Now we ask for a second effort, the first response is a surprise as nobody likes to lower their salary. But given the situation, they are starting to understand and we trust we can resolve it as soon as possible with captains, then other players."