Barcelona will look to bring Ziyech and Werner on loan in January until the end of the season, with an option to buy included in a deal but not an obligation. 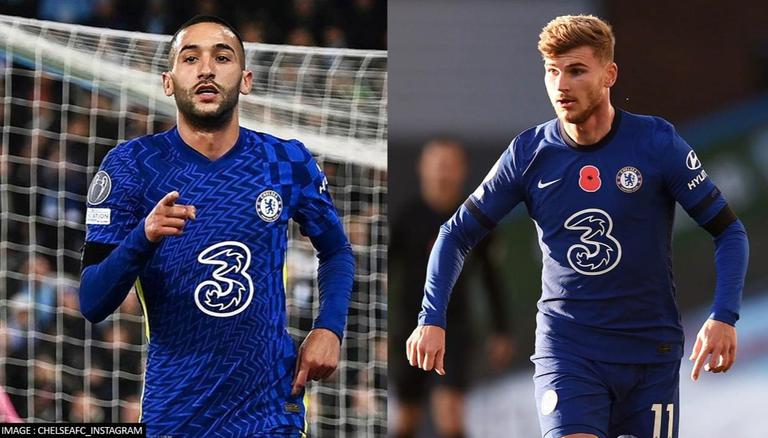 
Chelsea duo Hakim Ziyech and Timo Werner could find themselves in Barcelona colours if they are allowed to leave by Chelsea during the January transfer window. According to an ESPN report, Barcelona has targetted Hakim Ziyech and Timo Werner as an alternative to Manchester City's Raheem Sterling. England midfielder Raheem Sterling has been linked with an exit from Manchester City, with Barcelona touted as a potential destination due to lack of game time.

According to a report from Metro, City are ready to listen to offers for Raheem Sterling transfer in the winter transfer window and could possibly charge more. However, there will be only 12 months left on Sterling's contract at the end of this season, and City could lower the asking price to £45 million - £50 million as a result.

As per the ESPN report, Barcelona will look to bring Ziyech and Werner on loan in January until the end of the season, with an option to buy included in a deal but not an obligation. Both Ziyech and Werner have found it hard to break into Chelsea's playing 11 and are have started matches from the bench most of the time.

Ziyech has started just two Premier League games this season, although he has made 11 appearances in all competitions. Werner, meanwhile, has been limited to nine appearances in all competitions, with only six of them coming as a starter.  Hakim Ziyech was signed from Ajax for €40 million last year, while Timo Werner joined Chelsea from RB Leipzig at the same time in a deal worth €53 million.

READ | 'They have a lot of money;' says Sociedad's striker on Barcelona, Real Madrid's dominance

How has Barcelona done so far this season

Following the poor start under former coach Ronald Koeman, Barcelona will hope to improve their form under new coach and club legend Xavi Hernandez. Dani Alves was brought on board on a free transfer with ESPN report stating that the club has been ow pushed to the brink of their spending limit with LaLiga this season.

As per the report Barcelona's cap, which includes player wages and any signings throughout the season, has been fixed at €97m. However, they can spend 25% of any money they save on salaries or make on player exits. The club has other ways to increase their spending limit, such as bringing in new sponsors, but sources told ESPN the club are primarily focused on moving on players who are not part of Xavi's plans to make space on the wage bill.