Following the arrival of Robert Lewandowski to Barcelona from Bayern Munich, the demand for his shirt has skyrocketed and is currently out of stock as well. 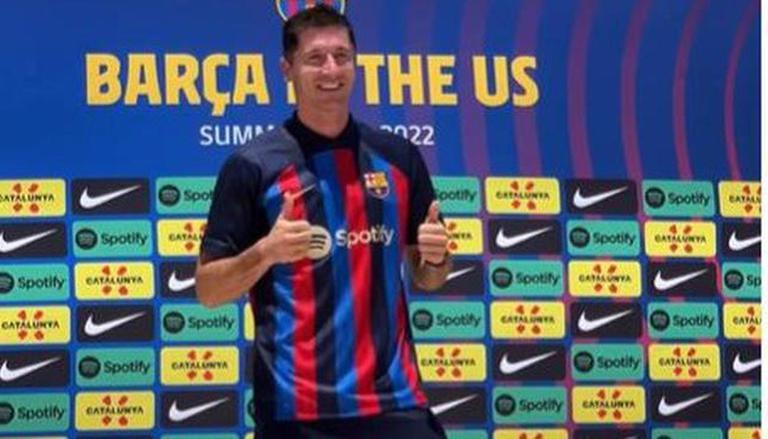 
Barcelona has had a very dynamic summer transfer window with the likes of Raphinha, Franck Kessie and Andreas Christensen arriving at Camp Nou. Besides the aforementioned players, the signing of Robert Lewandowski from Bayern Munich constitutes as a big statement by the Catalan club. With the arrival of the Polish striker, the demand for his jersey has skyrocketed and is currently out of stock as well. Despite such a huge demand, Barcelona was unable to sell more jerseys with Lewandowski's name on it due to bizarre reasons.

Why was Robert Lewandowski's Barcelona jersey unavailable for fans?

According to a report by Goal.com, the Nike store located at the premises of Camp Nou has run out of the letter W to put on the Barcelona jersey. Robert Lewandowski's name has two 'w's' in his name and in an Instagram video which has surfaced online, an employee of the store is seen explaining to a fan the reason behind the crisis. He said, "We don't have the letters 'W'. And because he has two 'W's' in his name, we have run out (of stock)."

Robert Lewandowski's transfer to Barcelona from Bayern Munich has cost the Catalan club fees to the tune of €50 million (£42m/$50m). The 33-year-old has signed a three-year deal that will run until the end of 2025. The buyout clause has been set at €500 million. The Robert Lewandowski unveiling was done in the US where the club is currently on a pre-season tour. The striker did not feature against Inter Miami, however, he could make his Barcelona debut against archrivals Real Madrid.

READ | Is Robert Lewandowski playing for Barcelona against Inter Miami? Here's an update

While speaking to Barca tv, Lewandowski Revealed the reason behind joining Barcelona. He said, "I’m here to help the club return to the top and win as many titles as possible. I have always wanted to play in a great La Liga club and this is a great opportunity for me. It is also a challenge for my private life. I am a player who always wants to win. We have great players, with a lot of quality, in the squad. I am excited about what we can all achieve together. I want to play and win titles and I know that with Xavi this will be very possible." Lewandowski had an incredible career with Bayern Munich scoring 344 goals in 375 games. He helped the club to eight Bundesliga title and also won three German Cups. In 2021, he finished second in Ballon d'Or, which was eventually awarded to Lionel Messi.