Captain, as well as modern-day great Cristiano Ronaldo, took a hilarious dig at a cameraman during a photoshoot of the Portugal team in the ongoing Euro 2020 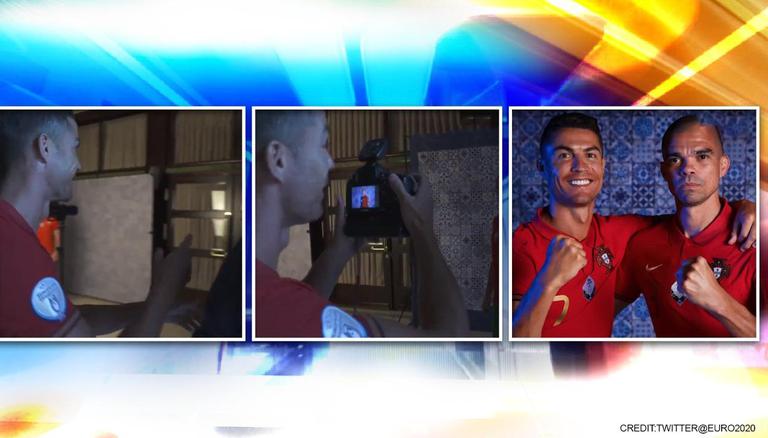 
Cristiano Ronaldo is on a roll in the ongoing Euro 2020. The Portugal captain became the all-time top goal-scorer in the history of the European Championships after a superb match-winning brace against Hungary earlier this week. At the same time, he was also in the news for moving aside two Coca-Cola bottles that were placed near him as he urged everyone to drink water during a press conference. The football megastar's stunt reportedly cost the soft-drink manufacturer a whopping $ 4 billion.

Now, 'CR7' decided to entertain his fans and well-wishers by turning photographer.

Lately,  during a photoshoot of the Portugal team, Cristiano decided to take a shot by clicking the photograph of his team-mate and defender Pepe. However, what really stands out here is that after the modern-day football great successfully clicked the picture, he turned to the cameraman and said ’Better than you’.

The video was posted by Euro 2020 on their official Twitter handle. Take a look:

READ | Cristiano Ronaldo the first to reach 300 million followers on Instagram; guess who's next

When Cristiano Ronaldo turned photographer at the Portugal media day! "Better than you!" 🤣🤣🤣#EURO2020 pic.twitter.com/y0LkqtaIlL

Once it came to the notice of the fans, they were left in splits and just could not help themselves. Here are some of the reactions.

Is there anything he can’t do? 🐐

This is why Cristiano is best photographer of all time

Coming back to the group game between Germany and Portugal, the 2014 world champions had the last laugh with a 4-2 win over Cristiano Ronaldo & Co. at the Allianz Arena in Munich on Saturday. Even though Ronaldo drew first blood for the defending champions in the 15th minute, own-goals from his teammates i.e.Centre-back Ruben Dias (35'), and, left-midfielder Raphaël Guerreiro (39') did not help in the team's cause as it gave the opposition a much-needed confidence-booster.

READ | Amul joins in on Cristiano Ronaldo-Coca Cola Controversy, has 'Kool' take on it

Even though Diogo Jota (67') did succeed in finding the back of the net, it just was not enough as rival midfielder Kai Havertz and left-back Robin Gosens' goals in the 51st & 60th minute had already done some irreparable damage for the title-holders.

At the same time, Portugal also became the first reigning champions in Euro Cup history to concede four goals in a match in the tournament.