Euro 2020 results: A dramatic conclusion to the Euro 2020 group stages on Wednesday saw France, Portugal and Germany qualify for the last 16 from Group F. 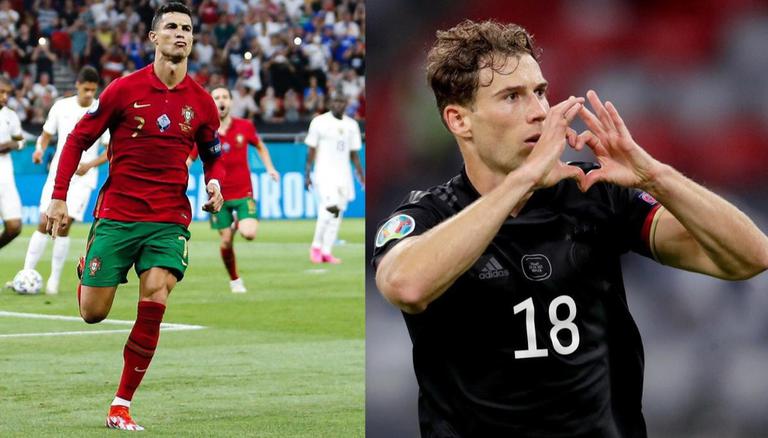 
Two penalties from Cristiano Ronaldo helped holders Portugal squeeze into the last 16 of the European Championship after a 2-2 draw with France in a dramatic conclusion to Euro 2020 Group F. Germany also have edged their way into the knockout stages after managing a late 2-2 draw to Hungary. Meanwhile, Spain thrashed Slovakia 5-0 earlier in the day. Here's a look at the Euro 2020 scores and Euro 2020 highlights from Wednesday.

Portugal's Cristiano Ronaldo tied the all-time men's record for international goals with a pair of penalties in a 2-2 draw with France in Group F in Budapest on Wednesday. Portugal had the better of chances in the opening 30 minutes and went ahead through a Ronaldo penalty after France keeper Hugo Lloris fouled Danilo in the area as the two challenged for the ball from a Moutinho free-kick into the box. However, Didier Deschamps' side drew level right before half-time when Nelsen Semedo brought down Kylian Mbappe in the area and Karim Benzema calmly slotted home from the spot.

Benzema doubled France's lead shortly after the restart, running on to a lovely pass from Paul Pogba over the top of the defence and firing a low shot past into the net. Ronaldo then drew his team back to level terms with another goal from the penalty spot at the hour mark following a whistle for handball on France's Jules Kounde in the area. The frantic Portugal vs France game ended 2-2 but there was plenty of controversy around the penalty decisions.

The result saw both teams advance to the Euro 2020 round of 16. France finished the group in first place from Group F and will face Switzerland in the round of 16 on Monday, while Portugal move on as one of the best third-place finishers to set up a knockout-round match against Belgium on Sunday, which is sure to make it to the Euro 2020 highlights. Here is the second of the top Euro 2020 results from Wednesday -

Euro 2020 round of 16: Leon Goretzka rescues Germany from Euro humiliation

Hungary looked to cause an upset when they opened the scoring on 11 minutes with an impressive diving header from captain Adam Szalai. However, Kai Havertz handed Germany a lifeline on 66 minutes when he scored his second goal of the tournament. The Chelsea midfielder headed the ball home into an empty net after a goalkeeping error from Hungary's Peter Gulacsi.

Hungary then struck back moments later as midfielder Andras Schafer nodded the ball past as an on-rushing Manuel Neuer. But Leon Goretzka levelled the match once more on 85 minutes to secure his side's place in the round of 16. Germany's draw on matchday 3 means they will face England at Wembley Stadium on Tuesday in the Euro 2020 Round of 16.

READ | Goretzka keeps Germany in Euro 2020 after draw with Hungary

Euro 2020 results from games on Wednesday