Man City Vs Chelsea Live Streaming: How To Watch Premier League Match In India, US And UK?

Know the live streaming details of the Manchester City vs Chelsea, Premier League 2021-22 match scheduled to be played at the City of Manchester Stadium. 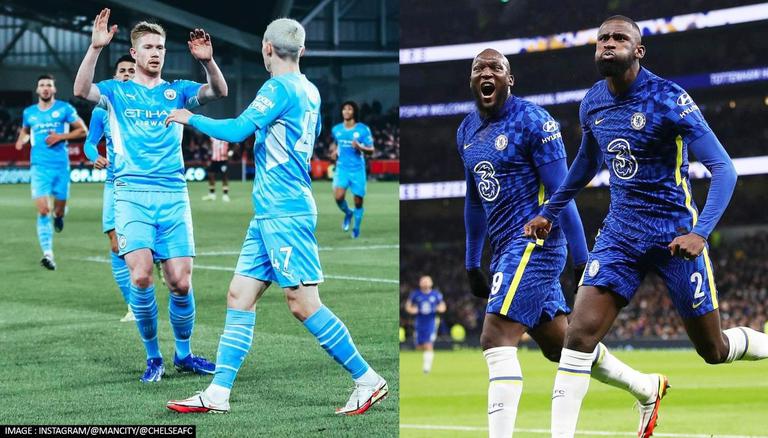 
Manchester City will be up against Chelsea in the Premier League 2021-22 match, scheduled to be played on Saturday at the City of Manchester Stadium. Pep Guardiola's side heads into their home game, enjoying an 11-game winning streak after defeating Arsenal 2-1 in their last match of the tournament. Meanwhile, Thomas Tuchel’s Chelsea face City after their last two games in the tournament have ended in draws against Brighton and Liverpool respectively.

Ahead of Saturday’s match, Manchester City sit at the top of the Premier League 2021-22 points table with 17 wins, two draws, and two losses after playing 21 matches in the season. Whereas, Chelsea sit second in the table with 12 wins, seven draws, and two defeats. In the meantime, City have returned with wins in their last five matches of the season, while Chelsea have won only one match as four out of the last five games have ended in draws. This is the second-ever Premier League clash between both teams as the top two sides in the tournament, as the other came in January 2015, where City drew their game 1-1, against the then-table toppers Chelsea. Both teams met each other for the first time in the current season on September 2021 when City defeated Chelsea 1-1 and City are now looking to secure an EPL double over Chelsea for the fourth time, have done so previously in the 2009-10, 2015-16 and 2017-18 season.

Football fans in India, wondering how to watch the Manchester City vs Chelsea match on Saturday, can tune in to the live telecast by Star Sports. Star Sports is the official broadcaster of the tournament in India and will telecast the match on the Star Sport Select 1 SD and HD channels. The match will be streamed live on the Disney+Hotstar mobile application and website. The match is scheduled to start at 6:00 PM IST on Saturday in India.

READ | ’I don’t like it’ - Tuchel on Lukaku's 'unhappy' comments

Interested football fans in the United Kingdom can tune into the live broadcast on BT Sport 1 and BT Sport Ultimate channels to enjoy the match. The live streaming will be available on BTSport.com and the BT Sport App. The match is scheduled to begin on 12:30 PM on Saturday in the UK.

At the same time, soccer fans in the United States can tune in to the live telecast on Fubo TV. The live streaming will be available on Peacock Premium for interested fans. The match is scheduled to kick off at 7:30 AM on Saturday in the US.