Messi, Ronaldo, Lewandowski Or Haaland: Which Player Has Most Goal Contributions In 2021?

A look at the players with the most goal-scoring contributions in the 2021 season among the players like Messi, Ronaldo, Lewandowski, and Haaland. 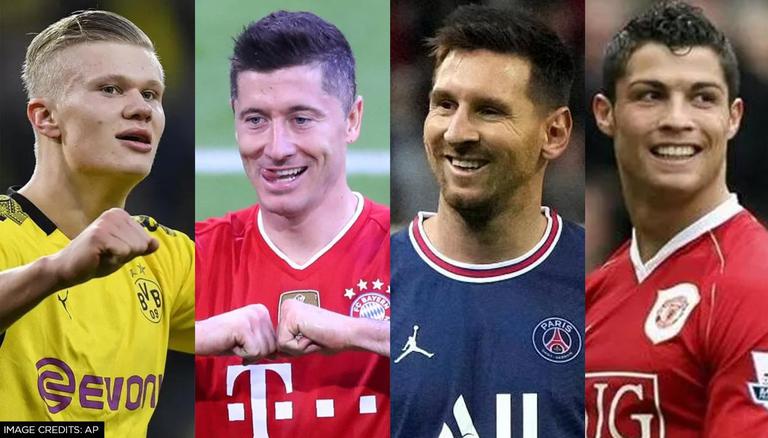 
The list of players with the most goal-scoring contributions in 2021 across all competitions has a mix of young and veteran talent which speaks in hefty amount about the skills displayed by the footballers across all competitions. The current list of most goals is topped by Erling Haaland who is followed by Kylian Mbappe and Robert Lewandowski. Meanwhile, legendary footballers Lionel Messi and Cristiano Ronaldo find themselves at the fourth and 11th positions respectively.

The Borussia Dortmund center-forward Erling Haaland tops the list, having netted the ball 35 times in the 35 matches that he has played this year. He has also successfully assisted 15 goals for the team. The 21-year-old has played eight matches in total for his team in Bundesliga, Champions League, DFB-Pokal, and DFL Supercup tournament in the 2021-22 season so far and has successfully found the goals on 11 occasions. In his most recent appearance for Dortmund in the Bundesliga clash against Union Berlin Haaland found the goal twice and helped the team to clinch a 4-2 victory on September 19.

22-year-old Kylian Mbappe, who is placed at the second position in the list of players with most goals, has found the net on 32 occasions and assisted goals 10 times. He has scored these goals while representing French Outfit Paris Saint-Germain(PSG) in 36 matches in the Ligue 1 and UEFA Champions League.  He has scored a total of four goals in the 2021-22 season in seven matches till now, the most recent of which came in PSG’s Ligue 1 clash against Clermont Foot.

Robert Lewandowski has scored 37 goals in 2021

The next player on the list, Robert Lewandowski has scored 37 goals for Bayern Munich in 27 appearances. The 33-year-old center-forward has assisted goals on three occasions for the team. In the 2021-22 season, Lewandowski has appeared in seven matches and has found the net successfully on 11 occasions. He last scored a goal in Dortmund’s Bundesliga match against Vfl Bochum on September 18, where the side won the match by 7-0.

Next on the list is legendary footballer Lionel Messi, who recently left Barcelona and joined the French outfit PSG. However, in 2021, Messi has appeared in 32 matches and has scored 28 goals, assisting the goal on 10 occasions. He is yet to score his first goal with his new team, as he has already played three matches for PSG in Ligue 1 and the UEFA Champions League 2021-22 season.

On the other hand, another legend who made a move to Manchester United in the summer transfer window, Cristiano Ronaldo finds himself in 11th place in the list of players with most goals in 2021, ahead of club teammate Bruno Fernandes. He has played in 34 matches this season and successfully netted the goal on 24 occasions. He has also assisted a goal four times. Since returning to the United this season, Ronaldo has scored four goals for the club in three appearances in the Premier League and Champions League.