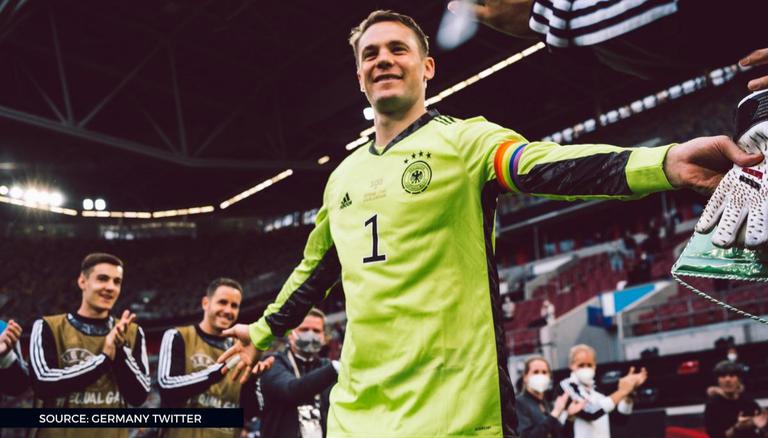 Germany's 7-1 win over Latvia was a special occasion for goalkeeper Manuel Neuer, who became the first German shot-stopper to reach 100 international appearances. The Bayern Munich superstar has been a constant between the sticks over the years for Joachim Low, and is expected to remain so in the upcoming European Championship and the FIFA World Cup next year. The 35-year-old has etched his name in Die Manchast's record books and will hope to yet another international silverware to his name at Euro 2020.

Manuel Neuer received a guard of honour by his teammates after he earned his 100th cap for Germany against Latvia. Neuer had made his debut against United Arab Emirates way back in 2009 and has remained the first choice ever since, and lifted the 2014 World Cup. Now the captain of the side, the Bayern Munich star donned a special pair of '100' gloves to mark the occasion.

The gloves also had his major honours and the years of his international career so far (2009 to 2021) listed on the strap. No keeper for the men's Germany football team had reached a century of appearances, with 1970s superstar Sepp Maier coming close with 95 caps. Neuer is expected to be first-choice for Germany's Euro 2020 bid, with Kevin Trapp and Arsenal's Bernd Leno also in the squad. The Germans will hope for a "Last Dance" with Joachm Low, who will step down following the tournament, with Hansi Flick set to takeover.

READ | Who is Debbie Hewitt? Know about FA's first ever female chairperson in 157 years

Manuel Neuer has been an inspirational figure in German football, and one could safely say that he is one of the finest keepers of his generation. The 35-year-old has been a constant for Bayern Munich over the years and has replicated his form at the international circuit for Germany. Neuer was part of Germany's U-21 squad that lifted the European Championships in 2009 and made the cut to the senior squad as the first choice goalkeeper for the 2010 FIFA World Cup.

Neuer was credited with modernising the sweeper-keeper style and played every minute at the Euro 2012 and the following 2014 FIFA World Cup. Die Mannschaft lifted the latter, with Neuer winning the golden glove, making him the second German after Oliver Kahn to win the award. Neuer assumed captaincy after the retirement of Bastian Schweinsteiger and will hope to make a claim for the Euro 2020 title this time around.