The Twitter user who posted the video wrote that the incident happened only minutes before Sunil Chhetri was handed a similar treatment by the WB Governor. 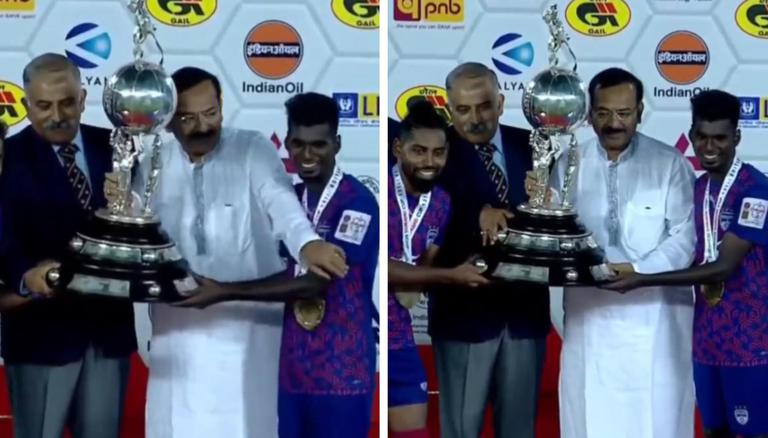 
Bengaluru FC won their maiden Durand Cup tournament beating Mumbai City FC in the finals on Sunday. Goals from Sivasakthi Narayanan and Alan Costa were enough for the former ISL champions to lift the elusive title at the Salt Lake stadium. The Durand Cup final between Bengaluru FC and Mumbai City FC was, however, marred by two separate incidents of players being pushed away by ministers during the trophy-presentation ceremony. While the first incident involved Indian football team captain Sunil Chhetri, the other had Bengaluru FC rookie striker Sivasakthi bearing the brunt of a minister's quest to hog the limelight.

In a video that has surfaced online, minister Aroop Biswas is seen pushing Bengaluru FC striker Sivasakthi aside to make his way for a photo with the coveted trophy. The Twitter user who posted the video has written that the incident happened only minutes before Sunil Chhetri was handed a similar treatment by the WB Governor. Watch the video of the Bengal sports minister pushing Bengaluru FC striker Sivasakthi away during the trophy ceremony:

This is what happened with shivshakti minutes before Chhetri. pic.twitter.com/TZmLP93Sdj

Indian football team skipper Sunil Chhetri was seen being pushed away by West Bengal Governor La Ganesan, while posing with the Durand Cup 2022 trophy. The incident did not go down well with the fans who slammed the Governor for his behaviour on social media.

WB Governor pushing away captain Sunil Chhetri the winner of Durand cup 2022 to stay in the limelight.

The captain should have walked away pic.twitter.com/kqAPGxjx5j

Bengaluru had the early advantage in the Durand Cup final courtesy of the team's top scorer Sivasakthi Narayanan who found the back of the net in the 5th minute. Jovanovic had put ball forward which Mumbai City FC defender Mourtada Fall failed to deal with. Sivasakthi pounced on the opportunity and scored the goal with a measured chip over the keeper. Mumbai City FC got the equalizer at the half-hour mark when Greg Stewart's left-footed shot was fended off by Gurpreet Sandhu, only for Apuia to tap home the rebound with ease.

READ | Sunil Chhetri delighted with India hosting U-17 Women WC: 'We saw what it did with boys'

Bengaluru FC took the lead for the second and final time when Chhetri delivered the ball from a corner kick which Brazilian Alan Costa nailed with a header into the back of the Mumbai net. Mumbai City came close to equalising the score yet again with Spanish midfielder Ripoll hitting the bar in the 77th minute. With six minutes of time added on, Mumbai did give it one final shot and Greg Stewart came close in the 94th minute, but his effort was also just wide.