Pep Guardiola was pictured with Bayern Munich striker Robert Lewandowski at the training facilities of Spanish second division side Girona. 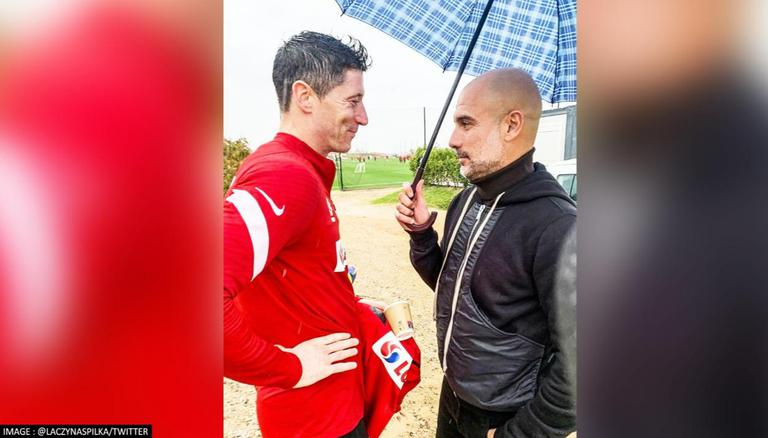 
Manchester City had a busy summer transfer window which saw their marquee striker Sergio Aguero depart after which they went looking for a striker. Along the way to find the perfect replacement for Aguero, City was heavily linked to many players including Cristiano Ronaldo, Harry Kane, and Erling Haaland. However, none of those transfers worked out as Kane and Haaland decided to stay put at their respective clubs and Ronaldo moved to cross-town rivals Manchester United. So Pep Guardiola's search for a striker continues and recently he was seen meeting with a former player of his back when the Spaniard coached Bayern Munich.

Pep was pictured with Robert Lewandowski at the training facilities of Spanish second division side Girona, which is 47 per cent owned by the City Football Group and 16 per cent of it is owned by Pep's brother Pere Guardiola. Lewandowski was at the facilities because his national team, Poland, are currently preparing there for their World Cup qualifier match against Andorra. The two were pictured talking to each other but about what, no one except the two know, it could be about a potential transfer but it could also just be the two former coach and player catching up.

Robert Lewandowski spent two years under Pep Guardiola when he was at Bayern Munich and the Poland striker tore apart the Bundesliga with his sensational scoring ability. Together at Bayern, the duo managed to win the German league twice in two consecutive seasons. It was under Guardiola that the Polish striker joined Bayern in the first place where Lewandowski has now gone to score 317 goals in 346 appearances.

Earlier this Lewandowski met admitted to meeting with the president of Real Madrid Florentino Perez but refused to divulge any information regarding their chat. Lewandowski told Gazzetta dello Sport: “It’s true that I met the president of Real Madrid  Florentino Perez once or twice after some matches in Madrid, but I can’t say more. With Bayern, I play in the Champions League every season against clubs from other countries, and I can show how good I am."

WE RECOMMEND
Suarez vows to give his trophy to Robert Lewandowski if he doesn't win Ballon d'Or 2021
A look at Cristiano Ronaldo's records against Pep Guardiola and Manchester City
Bayern Munich to go for Erling Haaland if Robert Lewandowski would leave in 2022: Reports
Pep Guardiola leaves door open for Raheem Sterling's exit as Barcelona rumours intensify
Robert Lewandowski scores in Bayern win for 60th goal of the year
Listen to the latest songs, only on JioSaavn.com