Rafael Nadal Fans Are Freaking Out Over His Statue At Roland Garros; Do They Have A Point? 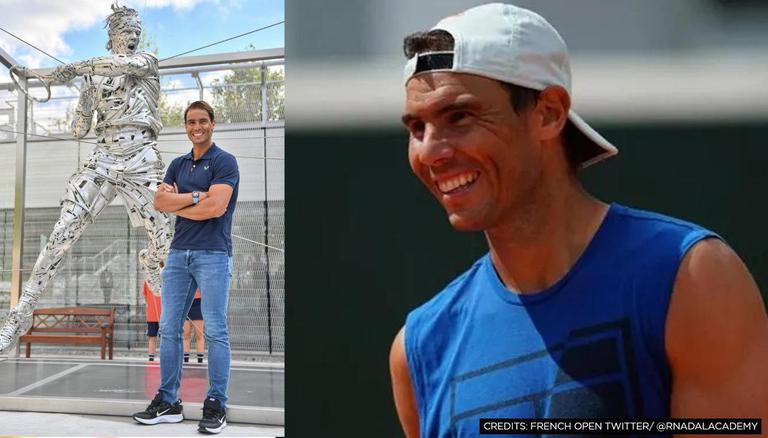 
Rafael Nadal's statute at the Court Phillippe-Chatrier where the French Open is held has got mixed reactions from his fans on Twitter. On May 27, Roland Garros revealed a statue of 13-time champion Rafael Nadal before the start of the season’s second Grand Slam championship. The statue - designed by famed Spanish sculptor Jordi Diez Fernandez - is made entirely of steel. Standing 3 metres tall, 4.89 metres wide and 2 metres deep, the sculpture has been placed next to the new “general public” entrance gate and the Jardin des Mousquetaires.

The real Rafa ALWAYS looks good, who is the statue, that’s not a likeness to Rafa’s beautiful face at all 😕

I am no expert 2 question d artist’s/sculptor’s intentions and capabilities but even a long time, die hard fan of Rafa couldn’t recognise d face of our sweetheart King
Face should have been so obvious that Noles, Rogers and lesser mortals felt the presence of King there

Rafa’s an active legend. I think it’s great he’s being honored now. Why wait until he’s done playing when he deserves such a recognition already

I like the overall figure of Rafa, my only criticism is the face it doesn't, imo look like our handsome King.

However it's a great tribute to a truly tremendous champion on and off the court. It's well deserved.

Novak Djokovic, Rafael Nadal, and Roger Federer all ended up in the same half of the French Open 2021 men's field in the draw Thursday, meaning no more than one of them can reach the final. The Big Three top the leaderboard for Grand Slam men's singles titles: Federer and Nadal head to Roland Garros, where play begins Sunday, tied with 20, while Djokovic has 18.

Nadal beat Djokovic in straight sets in the 2020 final for his record-extending 13th championship on the red clay of Paris, but if they meet again this time, it would be in the semifinals. Nadal is ranked and seeded No. 3 now and so he could have wound up on either side of the bracket; as luck would have it, he was placed in No. 1 Djokovic's half. So was Federer, whose record for most weeks atop the ATP rankings recently was broken by Djokovic and is currently at No. 8 after playing only three matches over the past 15 months because of two operations on his right knee. Federer could meet Djokovic in the quarterfinals.

The other possible men's quarterfinals on their side is Nadal vs. No. 7 Andrey Rublev.  On the other side of the draw, the potential quarterfinals are No. 2 Daniil Medvedev vs. No. 5 Stefanos Tsitsipas, and No. 4 Dominic Thiem vs. No. 6 Alexander Zverev.

Medvedev is a two-time Grand Slam finalist but is 0-4 for his French Open career. Thiem won last year's US Open and twice has been the runner-up in Paris. Nadal was there for the unveiling with French Tennis Federation President Gilles Moretton, Tournament Director Guy Forget and Jordi Diez Fernandez, the statue’s sculptor. The piece of art is located next to the general public entrance and the Jardin des Mousquetaires. Rafael Nadal takes the court on Sunday, May 30.

Rafael Nadal  'King of clay' is all set to start the 2021 edition of the French Open as the favorite. The 125th edition of the French Open at Roland Garros is set to start from May 30 onwards. Nadal can steer clear of Roger Federer to set a new record of most men's Grand Slam singles titles. Nadal is vying to win a record-extending 14th career Slam at the Roland Garros. He has won the tournament between 2005-2008, 2010-2014, and 2017-2020. Nadal can seal a fifth successive French Open title for the second time in his illustrious career. The Spaniard can also extend his tally of winning one or more Slams in a single year for the 15th time. Nadal has maintained a 100% record in Roland Garro's finals, winning all 13 finals.

The final comparison of the 'Big Three', the Djokovic vs Federer head to head currently stands at 27-23 in favour of Djokovic. Despite it being his favourite, Djokovic only has a slim 20–18 lead over Federer on hardcourts. Djokovic also leads 3–1 on grass courts - a Federer speciality - while both men are tied at 4–4 on clay, which is not a preferred venue for either player. The last match between the two was at the Australian Open 2020 semi-final, won by Djokovic in straight sets.

The Rafael Nadal vs Novak Djokovic head to head currently stands at 29-28 in favour of the Serbian. While Novak Djokovic leads with a massive 20-7 margin on hard courts, Nadal has a distinct advantage over Djokovic on his surface of choice, clay, having won 19 of their 26 meetings on the surface. The pair stand at an equal 2-2 on Grass Courts. The last time the two met each other was on the clay at the Rome Masters final that Nadal won in three sets.