Struggling La Liga club Barcelona have reported that three of their players have tested positive for COVID-19, Ousmane Dembele, Samuel Umtiti, and Gavi. 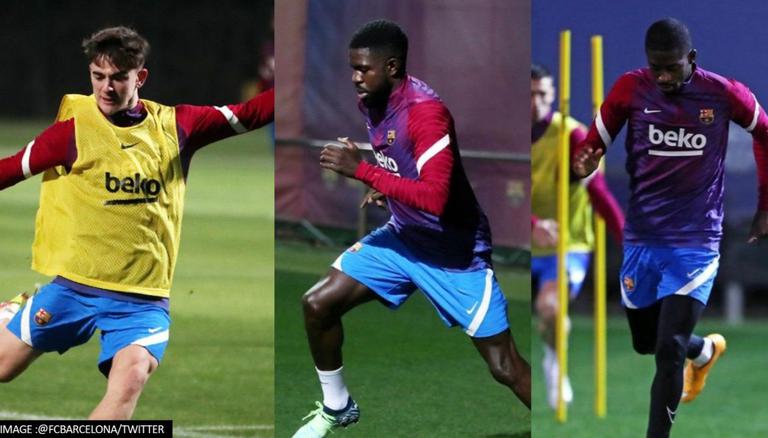 
The latest COVID-19 wave has taken the sporting world by the scruff of its neck as players and coaches tested positive causing major disruptions and cancellations. Football is one of the sports to face the brunt of the new wave with several matches being postponed as several players have been tested positive. The latest team to now pick up COVID infections is the struggling La Liga club, Barcelona. They have reported that three players have tested positive for COVID, Ousmane Dembele, Samuel Umtiti, and Spanish youngster Gavi.

In a statement on their website, Barcelona said that the players are in good health and are in isolation at their respective homes. They also added that they have informed the relevant authorities about the cases as well. The statement read: "The footballers O. Dembélé, Umtiti and Gavi are positive for COVID-19 after PCR tests on the squad. The players are in good health and self-isolating at home. The Club has reported the cases to the relevant authorities."

Currently, Barcelona have seven positive cases, including the three new ones, with Jordi Alba, Alejandro Balde, Dani Alves, and Clement Lenglet all having tested positive earlier this week. The news comes as a huge blow to Barca as manager Xavi will have a huge headache ahead of their game against Real Mallorca, who also have seven players of theirs out with COVID. While Gavi was already out of the next game owing to a suspension, along with Sergio Busquets, Ousmane Dembele and Samuel Umtiti will not be available for the upcoming La Liga games. Five more players, Sergino Dest, Gerard Pique, Ronald Araujo, Philippe Coutinho and Neto, who missed training on Tuesday after being given an extra day off will also be tested later today, according to a report from ESPN.

But Barcelona are not the only club dealing with a COVID outbreak as Rayo Vallecano have 17 positive cases in their first team ahead of their match against Atletico Madrid. Real Sociedad have 10 confirmed cases in their team. Real Madrid just saw a large number of players return from isolation as their COVID situation seems to be under control for the time being.