Timo Werner has been bestowed with honorary citizenship by a North Macedonian newspaper after his miss against the national team propelled their win. 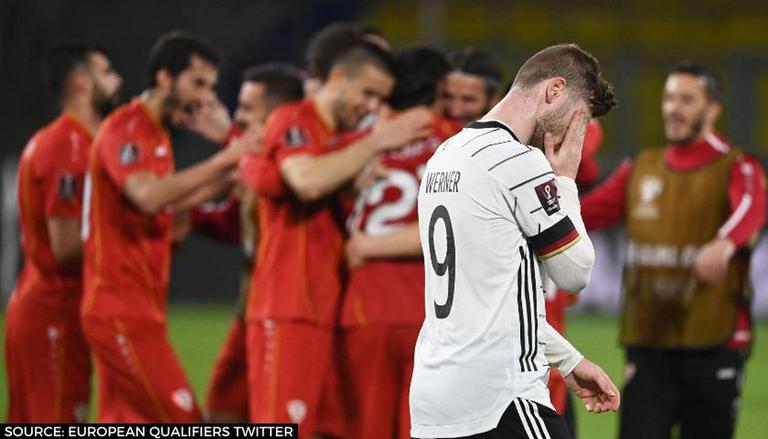 German national team striker Timo Werner has endured a challenging time on the field during the international break. The Chelsea forward was on the receiving end of criticism after he missed a sitter in Germany's clash against North Macedonia in the World Cup European qualifier's campaign, paving way for his side's defeat. Following the victory, a North Macedonian newspaper has bestowed honorary citizenship on the German striker.

Goran Pandev's effort in the injury time of the first half helped North Macedonia break the deadlock against Germany. However, the opener from Pandev was cancelled soon in the second half when Manchester City midfielder Ilkay Gundogan scored from the spot.

Joachim Leow's men could have bagged the lead for the first time in the 80th minute. Gundogan latched on to a through-ball before directing it towards Timo Werner, who was already past the North Macedonian defenders. A simple tap-in would have done wonders for the Chelsea forward.

TIMO WERNER, HOW DID YOU MISS?! 😱 pic.twitter.com/ACDf2yw26z

But Timo Werner went on to strike the ball away from the goal post, to sum up, his performances ever since his move away from RB Leipzig last summer. Five minutes following the Timo Werner miss, Germany went on to concede their second goal of the night with Eljif Elmas scoring from a close range past Marc-Andre ter Stegen. And North Macedonia went on to maintain their lead until the final whistle.

The miss gave birth to more Timo Werner memes, being one of the Germany vs North Macedonia highlights. The 25-year-old has become a subject of intense mockery and trolling from fans and rivals alike. Even as Chelsea fans questioned the club's decision to entrust the striker to lead the lines at Stamford Bridge, North Macedonian football fans are particularly happy.

Having made 39 appearances with the Stamford Bridge outfit since the start of the current campaign, the Timo Werner stats read a mere 10 goals and an equal number of assists to his credit. His struggling form might spell trouble for manager Thomas Tuchel with some crucial Chelsea fixtures ahead, including the two-legged tie against Porto in the quarter-final of the Champions League.