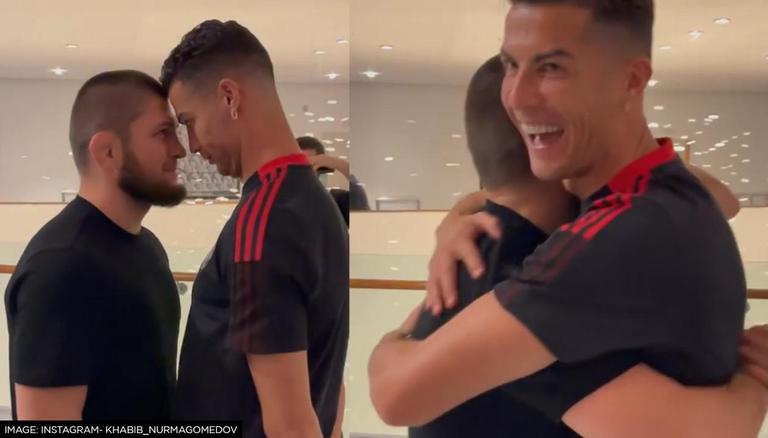 
UFC icon Khabib Nurmagomedov had a memorable time with some of his good friends from the sports fraternity including the likes of the legendary football manager Sir Alex Ferguson, multiple-time Olympic gold medal-winning sprinter Usain Bolt, French footballers  Patrice Evra and Paul Pogba during his visit to Old Trafford last weekend.

Khabib also received a special Manchester United jersey with his name and Cristiano Ronaldo's jersey number i.e. 7 on it. However, the main event took place when the two icons faced off against each other in a friendly wrestling bout.

Recently, Khabib Nurmagomedov had posted a few images and a couple of videos of him having some fun with his old friend Cristiano Ronaldo. The duo was clicked together in a single frame and then 'CR7' was tried to execute the Takedown attack on the former UFC Champion and in the following image, Khabib was seen blocking Ronaldo from holding his legs as a part of the takedown move.

The two then hugged each other and had a hearty laugh. In the final video, Cristiano Ronaldo's teammate Paul Pogba was cracking jokes as he, Khabib & the Portuguese megastar had a gala time.

The UFC icon was in attendance at the 'Theatre of Dreams' for the Manchester United vs Everton clash on Saturday.

While the former UFC Lightweight Champion likes Manchester United and is also a huge admirer of Sir Alex Ferguson and Cristiano Ronaldo, the 'Red Devils' is not his favorite team as he supports two other football clubs as well. It has been learned that the mixed martial artist roots for the Russian club FC Anzhi Makhachkala, one of the successful Spanish clubs Real Madrid.

Khabib Nurmagomedov has had a successful career as a mixed martial artist but, decided to announce his retirement when he was at the peak of his career. Khabib competed for one last time against Justin  Gaethje on October 24, 2020. With just over a minute left in Round 2 of the Khabib vs Gaethje showdown, the champ managed to bring The Highlight down to the mat with a fantastic takedown off a transition. What followed next was Khabib's relenting pressure as he executed a triangle choke, forcing Gaethje to submit. The referee missed Gaethje's tap, instead stopped the match when the challenger was already half unconscious.

Khabib extended his immaculate MMA record to 29-0 with another dominant performance at UFC 254. That's exactly the point where fans left stunned as Khabib Nurmagomedov paid a tribute to his late father, Abdulmanap, weeping in the middle of the octagon before leaving his gloves at the center and declaring it was his last fight in the UFC.

Even though Khabib Nurmagomedov retired at the age of 32, he still continues to remain one of the most accomplished fighters to date with an invincible  29-0 record. He scored 13 wins in the UFC, having made his debut in the company back in 2012. Out of his 29 wins, 8 came via TKO, while he forced his opponents to submit a whopping 11 times. His last three wins in the UFC - over Gaethje, Poirier and McGregor - all came via submission. Khabib won the lightweight title in 2018, beating Al Iaquinta (via TKO) for the vacant belt. He has three successful title defences to his name.