Check out the best memes on the Internet following Day 15 at the FIFA World Cup 2022, where France and England advanced into the quarterfinals. 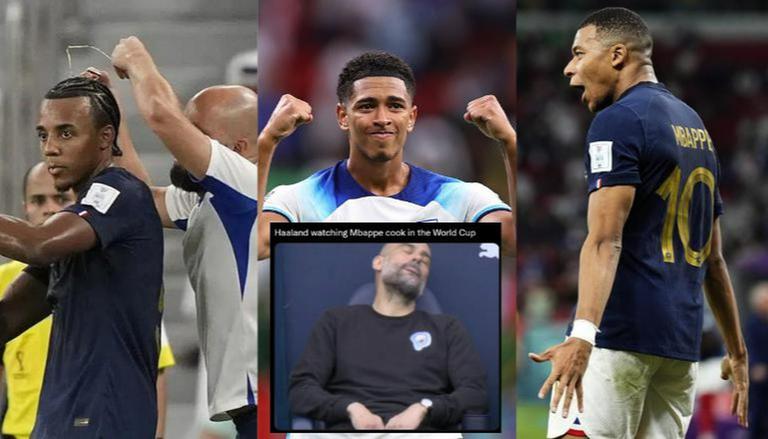 
The Day 15 of the FIFA World Cup 2022 in Qatar concluded with France and England sealing their spots in the quarterfinals, after defeating Poland and Senegal respectively. In the day's first match, Olivier Giroud’s record goal in the first half, followed by Kylian Mbappe’s brace in the second half, led France to a 3-1 win over Poland. In the day’s final fixture, Jordan Henderson, Harry Kane, and Bukayo Saka scored goals for England, while youngster Jules Bellingham starred for the Three Lions during their 3-0 win over Senegal.

The 43rd minute of France’s Round of 16 matches against Poland also saw a bizarre moment, when defender Jules Kounde was asked to remove a gold chain that he was wearing. Although officials are required to inspect all the players before they take the field but the French player was seen wearing a necklace until the 43rd minute. This went on to become a trending talking point on social media and was also featured in several memes.

Erling Haaland dragged into the conversation after Kylian Mbappe's dominance

France went on to score their opening goal of the match minutes after the gold chain moment, as Giroud converted an assist by Mbappe. Giroud’s goal was his 52nd goal for France, which made him the country’s top goalscorer. The record was previously held by the legendary Arsenal and Barcelona forward Thierry Henry. After watching Mbappe's solid show in the marquee event, fans were quick to drag Norwegian footballer and Manchester City star Erling Haaland into the conversation.

We present you our new Miss Penalty pic.twitter.com/fdRdA9pcCO

Lewandowski in this Poland squad pic.twitter.com/vCm9JykIF2

In the second fixture of Day 15, Jordan Henderson scored the opening goal for England against Senegal in the 38th minute, following a beautiful setup by Jude Bellingham. The 19-year-old started training on Twitter as he became the youngest England player to assist the team in the World Cup. Going ahead in the game, Harry Kane contributed with his first goal of the FIFA World Cup 2022 in the additional time before half-time.

Jude Bellingham with all the players that are better than him pic.twitter.com/nGcm79q9sy

In the second half of the game, Bukayo Saka scored England’s third goal of the night in the 57th minute. Interestingly, Phil Foden assisted both Kane and Saka’s goals in the match. Meanwhile, France and England will now lock horns in the quarterfinals of the FIFA World Cup 2022.