Check out the best memes on the Internet after Portugal and Brazil join France in the Round of 16 of the ongoing FIFA World Cup 2022 in Qatar on Day 9. 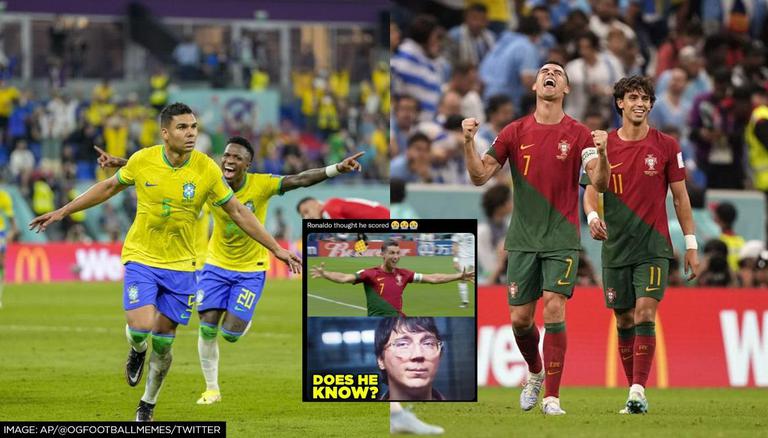 
Day 9 of the ongoing FIFA World Cup 2022 in Qatar concluded with several exciting results, featuring teams like Brazil, Portugal, and Ghana among others. While the day kicked off with Group G rivals Cameroon and Serbia returning with a 3-3 draw, South Korea suffered a 2-3 loss against Ghana in the second matchup for the day. Brazil became the second team after France to qualify for the FIFA World Cup 2022 Round of 16, courtesy of their win against Switzerland.

In the final matchup for the day, Portugal sealed a 2-0 win against Uruguay to join Brazil and France in the knockout stage. Meanwhile, five-time Ballon d’Or winner Cristiano Ronaldo again became a favorite for meme pages on social media. He claimed a goal that was later given to his teammate Bruno Fernandes.

While the 37-year-old thought he had scored the match's opening goal, it was eventually credited to Fernandes, who had curled in a cross from the left. The ball barely went over Ronaldo’s head, before bouncing into the far corner of the goal. Ronaldo believed he had scored his ninth overall World Cup goal and second of the current edition, but repeated close-up replays cleared all doubts.

New images show Ronaldo touched the ball, it was his goal. pic.twitter.com/lqxU8kvFvE

Fernandes went on to score another goal, this time through a penalty three minutes into the additional time and handed Portugal a 2-0 win. They will now face South Korea in their next group H match on December 2. South Korea suffered a 2-3 loss at the hands of Ghana on Day 9 and Son Heung-min was seen shedding tears after the defeat.

Vincent Aboubakar stars in memes after goal-scoring contribution for Cameroon

Earlier in the day, Jean-Charles Castelletto contributed with the opening goal for Cameroon in the 29th minute of the Group G game against Serbia. Vincent Aboubakar and Eric Maxim Choupo-Moting were the other goal scorers for Cameroon, while Strahinja Pavlovic, Sergej Milinkovic-Savic, and Aleksandar Mitrovic scored one goal each for Serbia. Both teams are now placed below Brazil and Switzerland in the group standings.