The Odisha Government has been the sponsor for the Indian hockey teams since 2018 after signing a ₹100 crore deal with Hockey India for five years. 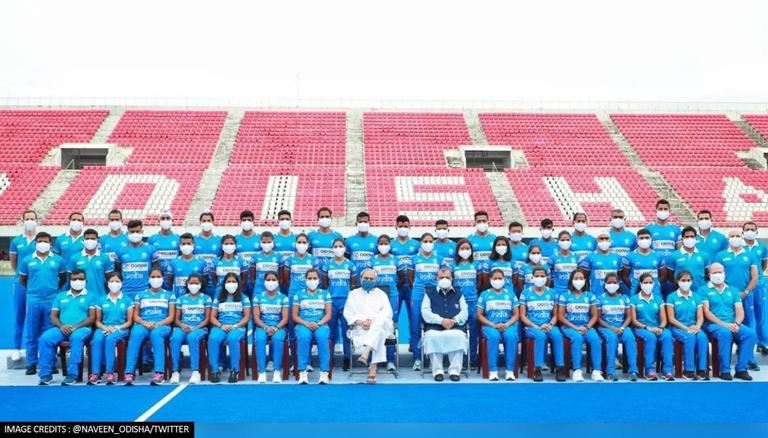 
Indian men's and women's hockey teams landed in Odisha on Tuesday for a grand felicitation organized by the Odisha Government. In the felicitation ceremony held at the Lok Sabha Bhawan, Odisha CM Naveen Patnaik announced that the Odisha government will continue to sponsor both national Hockey Teams of India for another ten years. The Odisha Government has been the sponsor for the Indian teams since 2018 after signing a ₹100 crore deal with Hockey India for five years. Since then, Odisha has been instrumental behind the stellar show put by Indian Hockey teams at the recently concluded Tokyo Olympics 2020.

The hockey players arrived at the Biju Patnaik International Airport on Tuesday morning and received a grand welcome from the people of Odisha. Their day started with having a post-lunch conversation with journalists before leaving for the Kalinga Stadium. Both the teams went for the felicitation ceremony held at the Lok Sabha Bhawan after having photo sessions with the CM Patnaik at the Kalinga Stadium. The teams will finish their day by having dinner with the chief minister. The teams are at the state capital for a two-day stay.

Last week, after the teams returned from the Tokyo Olympics 2020, CM Patnaik felicitated Indian men’s hockey players Birendra Lakra and Amit Rohidas and Indian women’s hockey players Deep Grace Ekka and Namita Toppo at the Kalinga stadium. He also handed ₹2.5 crores each to Men’s Vice-captain Birendra and defender Amit. Meanwhile, he also gave ₹50 lakh each to both the players from the women's team. The Indian Men’s Hockey team won the Bronze medal by defeating Germany 5-4 in the clash for third place at the Tokyo Olympics 2020. This was India’s first medal in 41 years of history in Hockey at the Olympic Games. India last won a gold medal in Hockey during the 1980 Moscow Olympics. On the other hand, the Indian women’s team finished fourth in the table after failing to win their bronze medal clash with Rio Olympics 2016 Gold medalist Great Britain.

Odisha- The Global hub for Hockey

Odisha has become the global hub for hockey in India since they became the official sponsors of the National team in 2018. This action by the state made Odisha the first Indian state to become the official sponsor of a National Sports team. Since then, the state govt in partnership with hockey India has successfully managed to bring the national spotlight to the state by hosting major hockey events in Bhubaneshwar.