Bray Wyatt had apologised to Braun Strowman after he had attacked him on Raw. However, Strowman was in no mood for it which prompted Wyatt to make a statement.

Bray Wyatt has been one of the best fear strikers in WWE since the last few years. It all started for Bray Wyatt when he used to lead 'The Wyatt Family' along with Eric Rowan and Luke Harper. Wyatt, who is nicknamed as 'The New Face of Fear' has had a successful outing as the leader of Wyatt Family as they were involved in some great feuds with 'The Shield', Kane, John Cena, etc. Currently, Bray Wyatt is enjoying an outstanding run in the singles competition especially with his new avatar 'The Fiend' who has been on a roll. However, it has been learned that Wyatt has issued an apology to Braun Strowman who was once a member of 'The Wyatt Family'.

READ: WWE Raw: The Fiend attacks Braun Strowman at the end of the show

Bray Wyatt a.k.a. the Fiend has been taking down people since the last few weeks. After the WWE Universal Champion Seth Rollins and Kane, 'The Eater of Worlds' manhandled the big man Braun Strowman during his match against Seth Rollins. Just when Strowman was looking to pick up a win over 'The Architect', the lights went off and once the lights were on, the  Fiend had Braun Strowman trapped in The Mandible Claw. It seems that Bray Wyatt has felt bad for his former team-mate and he took to social media to issue an apology. 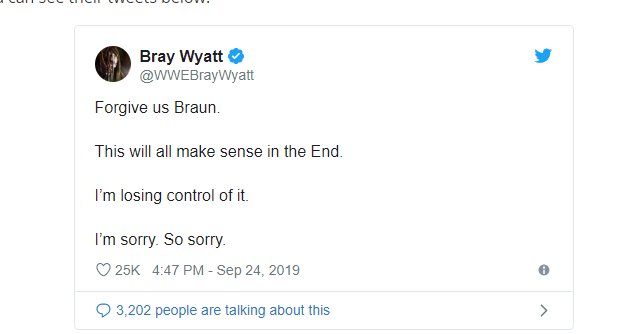 But, 'The Monster Among Men' was not in a mood to forget or forgive. The big man told his former leader that he has no idea what he has started and that he is not the boy who he had found all those years ago.

Even Wyatt did not get intimidated and he made a statement to Braun asking him to stay out of his way.

READ: WWE: The debut of the Elimination Chamber at Survivor Series 2002 PPV

The Fiend to face Seth Rollins

Bray Wyatt (The Fiend) will meet Seth Rollins at the Hell In A Cell pay-per-view for the WWE Universal Championship which will be taking place at Golden 1 Center in Sacramento, California on October 6. Heading into the event, Wyatt has succeeded in intimidating Rollins in the last two episodes of Raw. This rivalry started after Seth Rollins was attacked by The Fiend after he had successfully retained his title against Braun Strowman at the Clash of Champions.

READ: Is WWE fake? Understanding 'Kayfabe' and how it should be perceived