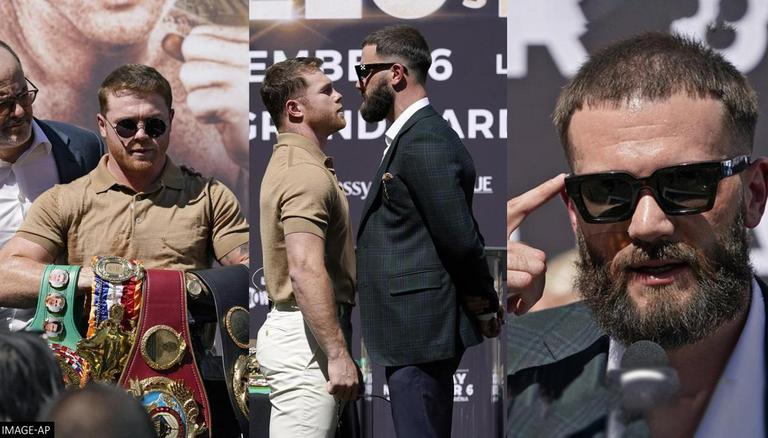 
Canelo Alvarez and Caleb Plant are all set to lock horns on November 6, in the four-belt super-middleweight unification match. Alvarez currently holds the World Boxing Association (WBA), World Boxing Organization (WBO), and World Boxing Council (WBC) championship titles, having added the WBO title by defeating Billy Joe in a face-breaking bout in May.

Plant, on the other hand, holds the International Boxing Federation (IBF) title since winning against Jose Uzcategui in January 2019. He has made three successful title defences ever since he earned the title, whereas, Alvarez is on a 15 fight unbeaten streak, ever since losing to Floyd Mayweather in 2013.

Canelo Alvarez vs Caleb Plant: What has been said?

The two fighters couldn’t wait for the title bout in November when they met for a press conference back in September. During the heated press conference, Alvarez hit Plant with a punch after things were said about his mother.

As per AP, after getting hit, Plant said, “We were just saying things, just the normal back-and-forth banter, and then he did what he did”. He also repeatedly called Alvarez a cheater for using banned substances. However, in reply to Plant, Alvarez said, “For me, it’s for history, for Mexico, for my team. I’m going to knock out this guy in less than eight rounds”.

Andre Dirrell vs. Marcos Hernandez in the Super middleweight bout

Rey Vargas vs. Leonardo Baez in the Super bantamweight bout

The Canelo Alvarez vs Caleb Plant fight is going to be held at the MGM Grand Garden Arena in Las Vegas Nevada. The match will start at around 5 AM on November 7 in the UK, and at 9 PM ET on November 6 in the US. Boxing fans wondering how to watch the undisputed title clash can see the live stream on Showtime PPV in the US, while BT Sport Box Office will broadcast the much-anticipated clash in the UK.

WE RECOMMEND
Canelo Alvarez vs Billy Joe Saunders fight purse: How much did the 2 boxers earn?
What happened to Canelo Alvarez brother? kidnapping, negotiations and more
Canelo Alvarez abuses and KICKS two Jake Paul fans out of the ring: Watch
Canelo Alvarez reckons Jake, Logan Paul could ‘Get Killed’ for taking boxing lightly
Canelo Álvarez to fight Caleb Plant on Nov. 6 in Las Vegas
Listen to the latest songs, only on JioSaavn.com