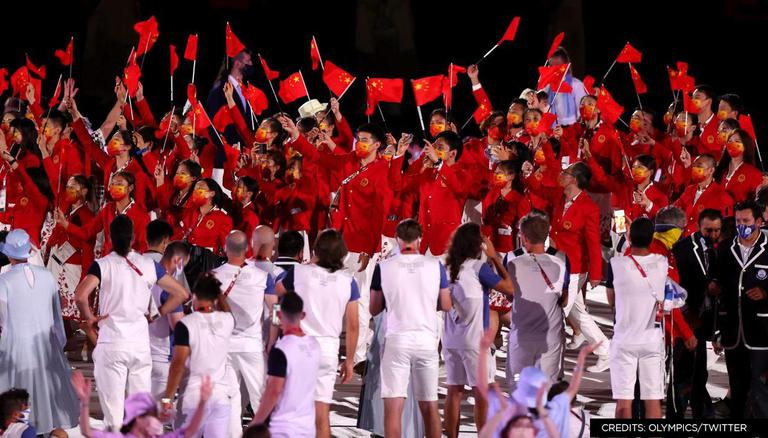 
The Tokyo Olympics 2020 were on Friday officially declared 'open' with a barrage of fireworks, glimpses to Japan’s history and culture, and a mesmerizing drone display over the night sky. Tennis star Naomi Osaka concluded the ceremony by lighting the Olympic cauldron atop a peak inspired by Mount Fuji. The entire world on Friday came to a standstill to witness the iconic Olympics opening ceremony in Tokyo, however, a disruption in live streaming during the entry of Taiwan ('Chinese Taipei') might fume the Chinese fans.

As per ABC journalist Bang Xiao, the Chinese citizens watching the Tokyo Olympics opening ceremony fumed at Tencent after it cut the 'Chinese Taipei' Taiwan's team off and replaced the content with a short standup comedy clip. As per Xiao, "the transmission abruptly stopped when the Taiwanese team walked into the stadium." Notably, Taiwan is referred to as the 'Chinese Taipei' in the Olympic Games.

China's Tencent Video was accused of censoring the #Tokyo2020 opening ceremony as the platform cut the Chinese Taipei team off and replaced the content with a short standup comedy clip.

Taiwan is referred to the Chinese Taipei in the Olympic Games. The transmission abruptly stopped when the Taiwanese team walked into the stadium.

Chinese audiences watching #Tokyo2020 on Tencent were angered after the interruption accidentally made them miss out the appearance of China's largest overseas team in history.

Taiwan has been marching under the name of ‘Chinese Taipei’ since the 1984 Olympic Games despite a long political battle for recognition with the mainland. The controversy regarding the political status of Taiwan which is also known as the 'Taiwan Issue' is a result of the Chinese Civil War and the subsequent split of China into the two present-day self-governing entities of the People's Republic of China.

However, China's threat to its neighbors like Taiwan and territories like Hong Kong often comes into the spotlight.

How messed up is it that Taiwan 🇹🇼 has to represent themselves as Chinese Taipei with this as their flag? #Tokyo2020 pic.twitter.com/nqAZnivtKT

"Chinese Taipei" in #OpeningCeremony
Kid: "Is that really Taiwan? What's up with the flag?"
Me: "Well...[insert brief explanation]"
Kid: "That's so mean!"
Few minutes later:
Kid: "Why does China get to march with their flag? This is so unfair! When CAN Taiwan use their flag?"

not going to watch the olympics unless they change "chinese taipei" to taiwan.

Tokyo's National Stadium was shocked to discover the Pakistan Olympic Team's maskless flag bearers marching confidently during the Opening ceremony. While the rest of the team marched with their faces covered, the two athletes who carried their country's flag had ignorantly put their masks down.

Badminton player Mahoor Shahzad had completely discarded all sorts of regulations while she let her mask completely hang below the chin. However, shooter Khalil Akhtar who accompanied Mahoor during the ceremony did have his mask on yet it still wasn't covering his face completely, leaving his nose out. This was a clear violation of the protocols set up by the Tokyo Olympics committee. The games had already been delayed owing to the COVID-19 and many athletes even had to train for the showpiece event in complete isolation.