Indian wrestler Anirudh Kumar defeated Aydin Ahmadov of Azerbaijan by a remarkable 7-2 to win the bronze medal at the World Junior Wrestling Championship 2021. 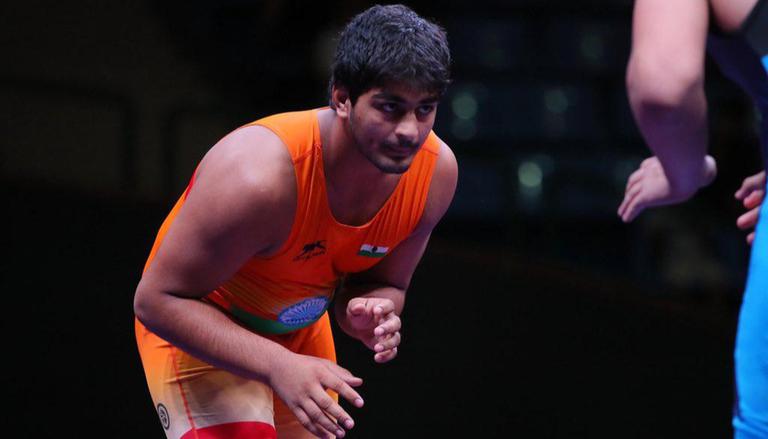 
Indian wrestler Anirudh Kumar has picked up the bronze medal after he beat Azerbaijan's Aydin Ahmadov in the 125 kg category by an impressive score of 7-2 at the World Junior Wrestling Championship 2021. This added to the four bronze and one silver medal the Indian men's contingent has won at the championships this year.

Indian Grappler Ravinder earned a silver medal for India in the 61kg Men's final, at the World Junior Wrestling Championship 2021. Ravinder finished second at the table after getting defeated 3-9 by Iranian Grappler Rahman Amouzad. Ravinder earlier stormed into the finals by defeating Armenia’s Levik Mikayelyan in the semi-finals. Meanwhile, Iran's Rahman Amouzad became the Junior World Champion in a stellar fashion. He has previously won two Cadel World Championships and claimed a bronze medal from the senior level 2020 Individual World Cup.

Ravinder had earlier won the Asian cadet title in 2018 and also has a silver medal to his name at the 2019 Under-23 world championships. Although Ravinder finished second, he was highly expected to return with a gold medal following the footsteps of Deepak Punia, who won the gold medal for India in 2018 at the World Junior Wrestling Championships. Punia's gold was the first for India in 20 years of the event. Punia went on to become an Olympian, representing India in 86kg Men's Wrestling event in the recently concluded Tokyo Olympics 2020. However, Punia lost his bronze medal match and returned home without any medal after finishing fourth in the table.

READ | IOC gets more power to remove sports from Olympics; Weightlifting and Boxing under review

Baliyan and Deepak pick up bronze

Also in the World Junior Wrestling Championship, other Indian Wrestlers like Gourav Baliyan and Deepak won bronze medals in the 79 kg and 97kg category, respectively. On the other hand, Grappler Yash also picked up a bronze medal in the 74 kg Men's category on Wednesday. Grappler Bipasha, assured herself a medal on Wednesday, after fixing a spot for herself in the finals by defeating Odbag Ulzibat 9-4 in the semifinals. She will now play for the gold medal on Thursday. India currently stands sixth in the points table, having earned one silver medal and three bronze medals. Also winning bronze in the men's event was Pruthviraj Patil in the 92 kg category.

The World Junior Wrestling Championship is being hosted by United World Wrestling in Ufa, Russia. The tournament began on August 16 and is set to end on August 22. The Junior World Championship is an event that brings together the best wrestlers aged between 18 to 20 years old, every year. It is seen as an opportunity for young wrestlers to pave their way to become future champions for their countries.