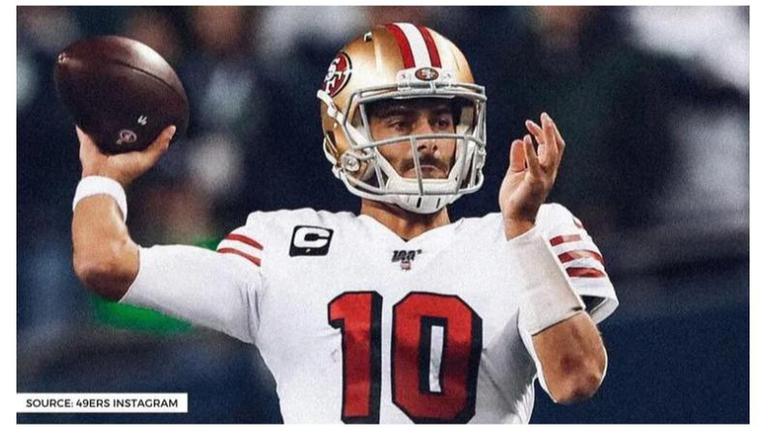 
After serving as Tom Brady’s backup for three-and-a-half years with the Patriots, Jimmy Garoppolo was traded to the San Francisco 49ers in 2017. Since then, Garoppolo has remained the star quarterback for the team, where he also won his first 5 starts. However, when the 49ers took the field while kicking off their second half against Seattle Seahawks, there was a bit of a surprise as Jimmy Garoppolo was missing in action as rookie Trey Lance had taken his place.

So without further ado, let's find out why  Lance had replaced Garoppolo during the San Fransico 49ers' starter at quarterback in the first place.

According to San Francisco 49ers, the quarterback suffered a calf injury and at the same time, it was also learned that there was no immediate clarity regarding the extent of the injury.

While addressing the media after the game. the NFL star revealed that he has no clue from where he had picked up the injury and then added that he would be going for an MRI on Monday. Meanwhile, Jimmy Garoppolo also admitted that he could feel his right calf tighten up throughout the first half of the season. The quarterback though added he does not reckon that it he has ruptured his Achilles.

Jimmy Garoppolo completed 14 of 23 passes for 165 yards, a touchdown, and an interception before exiting the game. His lone touchdown of the day came from the 49ers' first drive of the game, on which he went 6-for-6 for 70 yards. The Seattle Seahawks won the game 28-21.

READ | Garoppolo uses criticism to push to 'next level'

Meanwhile, this is not the first time Jimmy Garoppolo had left midway. Last year, he had limped off the field with a suspected ankle injury in the fourth quarter of the 49ers vs Seahawks game. The starting quarterback was seen making his way to the locker room at the beginning of the fourth quarter with 14 minutes to play. He was ultimately replaced by Nick Mullens.

WE RECOMMEND
FANTASY PLAYS: Players to start and sit for NFL Week 4
Jimmy Garoppolo, Nick Bosa lead 49ers past Eagles 17-11
"It feels good" Patriots QB Mac Jones on getting his first NFL win
NFL chief medical officer explains 2021 testing procedures
NFL's greatest toes on turf off to a memorable start in '21
Listen to the latest songs, only on JioSaavn.com