Here's a look at how pit stops work in F1 and the pit stop records including the longest pit stop in F1 history after the Monaco Grand Prix. 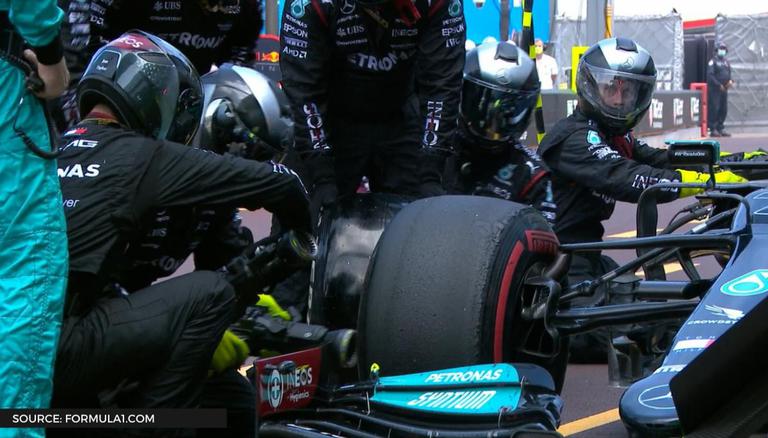 Pit stops are a major part of motorsports and especially F1 and are mainly used as stoppages to make adjustments or as penalties. Teams have a variety of pit stop strategies but are mainly focused on using less time to further the driver's cause and help them climb up the ladder during the race. Here's a look at what is a pit stop in F1, the longest pit stop in F1 history and how does F1 pit stop work.

While the driver is the centre of attention in a race, F1 is naturally a team sport and a pit stop carries that essence. Pit stops are a pause for refuelling, new tyres, repairs, mechanical adjustments, a driver change, a penalty, or any combination of the above.

How does F1 pit stop work?

Pit stops occur in an area called the pits, most commonly accessed via a pit lane that runs parallel to the start/finish straightaway of the track and is connected to it at each end. A Pitstop can be planned as well as unplanned and sudden according to the racing situation. A car generally pits once or twice depending upon the circuit. Over the years pit stop strategies have evolved and it just takes seconds for the crews to make changes with some well-choreographed moves. The F1 uses a traffic light system for cars to enter and exit the pit lane, giving the driver an indication of when it is safe to enter/exit the lane.

Which is the longest pit stop in F1 history?

The Longest pit stop in F1 history occurred recently after Mercedes F1 star Valterri Bottas suffered the fate during the Monaco Grand Prix. Bottas was running second in the Monaco Grand Prix but a bizarre pit stop failure ensured that he ended up with his first DNF in his career. The pit stop lasted more than 43 hours, as the Mercedes F1 team struggled to dislodge the right wheel from Bottas' No. 77. While there are a lot of theories as to why the failure happened, one can simply attribute it to the improper use of the wheel gun.

Each team in the F1 gets two pneumatic wheel guns, in case one of them fails, operating on compressed air. Mechanics have buttons on the wheel guns to signal when a stop has been made, but may also raise their hands too. While Mercedes did suffer the embarrassment of having the longest pit stop in F1 history, it also deeply affected their place in the standings, as they conceded the lead to rivals Red Bull Racing, in both the constructors and the drivers' championships.

Red Bull Racing over the years have aced the art of pitting giving their drivers the edge during the race. A pit stop typically takes 2 to 3 seconds to complete. Red Bull Racing holds the current world record for the fastest pit stop in F1 history, with a 1.82 second stop performed at the 2019 Brazilian Grand Prix on Max Verstappen. Red Bull technicians are simply neat at their work and get the job done in a flash much to the awe and amazement of their rivals. Mercedes despite their embarrassment in Monaco have tried keeping up and have the fastest pit stop in the F1 this season, completing the manoeuvre in 2.24 seconds at the Emilia-Romagna GP in Italy.