Manny Pacquiao Vs Errol Spence Jr Fight Purse: How Much Can Fighters Make From The Bout?

Manny Pacquiao vs Errol Spence Jr fight purse: Pac-Man dropped the poster of his upcoming fight, confirming Spence as his next opponent. 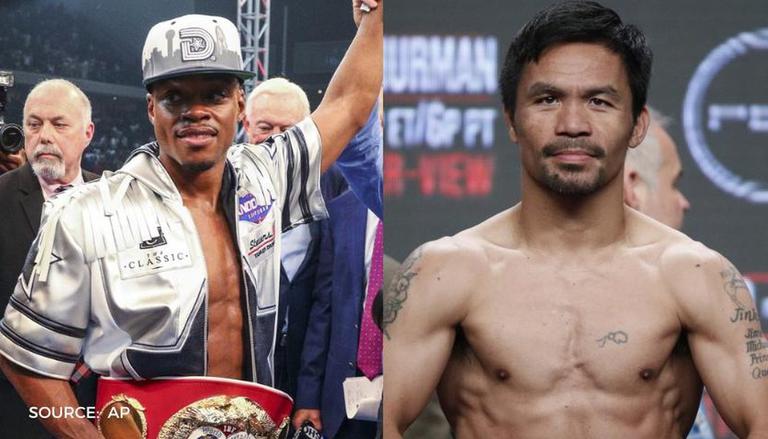 
After almost two years of absence, Manny Pacquiao is ready to step back inside the ring. The Pac-Man recently took to Twitter and dropped the poster of his upcoming fight, confirming Errol Spence Jr as his next opponent. The clash is set to take place on August 21 in Las Vegas, making it one of the most highly-anticipated bouts of the year.

Errol Spence Jr is currently the WBC and IBF welterweight champion, while Manny Pacquiao holds the status as the WBA "champion in recess". The boxing legend was moved to champion in recess status due to his absence from the sport, prompting Yordenis Ugas to take the "super champion" mantle after his win over Abel Ramos in September 2020. However, fans expect him to reclaim the title in the future as he’s currently the opening odds favourite.

Pac-Man’s last clash came in July 2019 where he defeated Keith Thurman, proving to the world that he still boasts his godly power and speed. Spence, on the other hand, is a surging superstar, who boasts an undefeated record of 27-0, having a chance to shock the world. He defeated Danny Garcia in his last bout in September, which was also his first action since a horrific car crash that he escaped with only minor injuries.

The Manny Pacquiao vs Errol Spence bout will take place a week after the Guillermo Rigondeaux vs John Riel Casimero event on August 21, 2021. FOX is expected to deliver an incredible show, which is expected to generate tons on PPV sales. However, when it comes to the ‘Manny Pacquiao vs Errol Spence Jr fight purse,’ officials are yet to make any revelations.

How much will Manny Pacquiao earn from Errol Spence Jr fight?

Both the fighters are expected to make a huge purse from the event, with Errol Spence Jr possibly getting his biggest paycheck. Pacquiao, on the other hand, is rumoured to get more than what he received for the Thurman bout, which is around $20 million. However, the Pac-Man is expected to give the majority of his purse to charity.

READ | Floyd Mayweather hails Manny Pacquiao, says he is 'the Best Fighter I Ever Fought'

Considering the exact venue of the clash is yet to be determined, the “Manny Pacquiao vs Errol Spence Jr tickets” are yet to go on sale, with details yet to be revealed.