In what was the shortest ever Grand Prix, Red Bull's Max Verstappen came out on top of a heavily shortened Belgian Grand Prix owing to some bad weather. 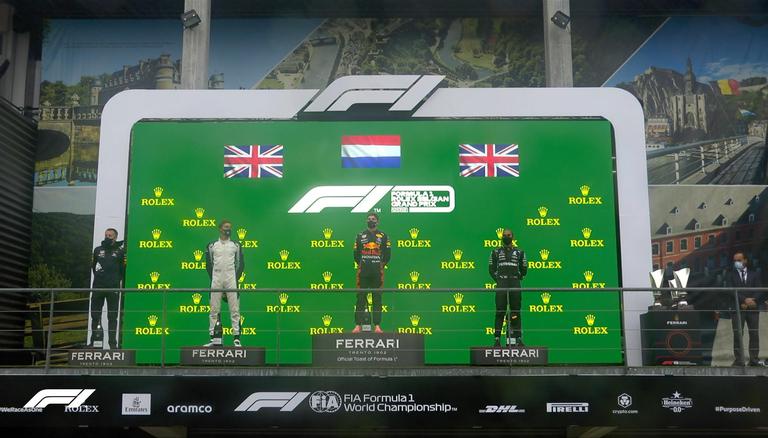 
In what was the shortest ever Grand Prix, Red Bull's Max Verstappen came out on top of a heavily shortened Belgian Grand Prix owing to some bad weather. Max finished ahead of second-place Williams qualifier George Russell and third-place Mercedes driver Lewis Hamilton. The race took place behind a safety car after the rain played spoilsport cause F1 Race Director Michael Masi to delay the race.

How the race played out?

The race was scheduled to start at 15:00 PM local time and after about a 25-minute delay, the rain showed no promise of slowing down the formation laps behind the Safety Car followed however Masi had the red flag waved and all the cars were back in the pit lanes. After many more delays, the race resumed finally at 18:17 local time and after only a handful of laps behind the Safety Car followed by another red flag, Verstappen pulled back into the pits, and at 18:45 local time, it was announced that the race will not resume. So most of the field finished where they had qualified, with only half points being awarded as the rules state that at least 75% of the race must be completed for full points to be given.

Before the race was scheduled to begin, Red Bull's Sergio Perez was out after crashing into the barriers at Les Combes and was out of the race owing to heavy right front suspension damage. They did try and get his car ready in time for the race however that did not happen. George Russel got his first-ever podium finish as Max won his 16th Grand Prix while Hamilton bagged his 174th podium finish.

For the driver standings, that means that Verstappen was awarded 12.5 points and closed the gap to three points on Hamilton who was awarded 7.5 points for his third-place finish. Lando Norris stayed in the third position on driver charts despite not finishing in the top 10 as Bottas himself did not manage a top 10 finish. Esteban Ocon added to the points he gained on his last race where he finished first by getting three points for a seventh-place finish leaving him 10th on the driver standings.

Hamilton asks for the fans' money to be returned

The fans were in a generally happy mood and almost all of them stayed out to how it would play out and the Mercedes driver noticed it. Hamilton spoke with Sky Sports after the podium ceremony was over and he was not impressed by the way the whole situation was handled. He said that while it was very dangerous to race in those conditions the fans should have their money returned.

READ | Fernando Alonso opines on his return to F1, dubs criticism as 'blessing'

"Money talks and the two laps to start the race is all a money scenario. So everyone gets their money and I think the fans should get theirs back too. Because unfortunately, they didn’t get to see what they paid for. Obviously, we can’t control the weather, and I love racing in the rain, but today was something else. You really couldn’t see the car ahead, there was aquaplaning, it was unfortunately just a disaster on track. But the fans stayed out in the rain. They still had energy, they still created the atmosphere but they were robbed of a race today. I think they deserve their money back," said Hamilton.