NBA India Games: Mumbai's Gateway Of India Lights Up Ahead Of Clash

NBA is set to come to India for the first time as Indiana Pacers and Sacremento Kings clash, and the excitement built up with Gateway of India lighting up.

It’s a normal sight for the Chhatrapati Shivaji Maharaj Terminus to be illuminated for various days of importance, but now another Mumbai landmark is following suit. While it’s usually a case of only colours at the CST, The Gateway of India not just was illuminated, but even adorned a beautiful graphical representation of the NBA India Games that is set to be held in the city. The special decoration was to build up anticipation as the first-ever NBA match of pre-season will be held in Mumbai on October 4 and 5. 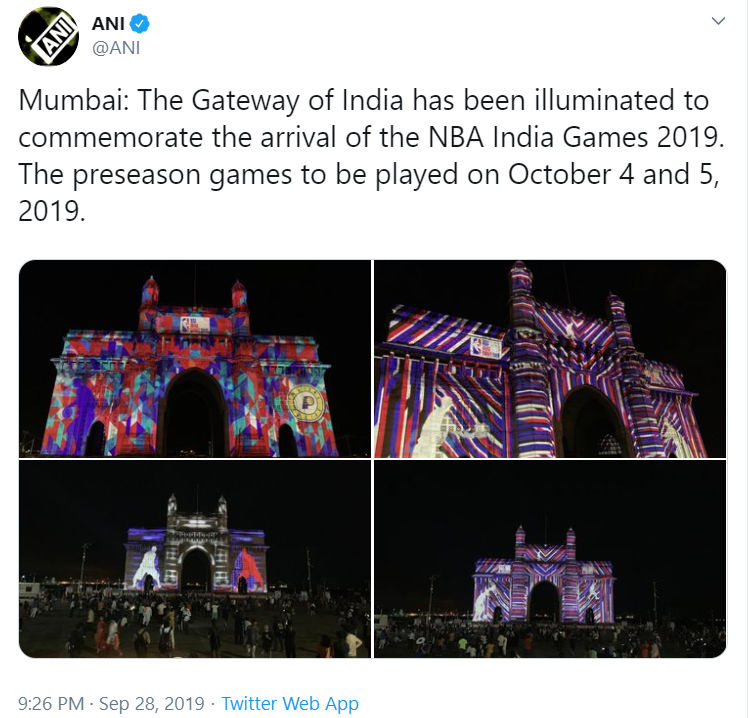 The Gateway of India on Saturday was lit colourfully in hues of red, green and blue and then the colours of the NBA logo. The walls of the monument became a screen of sorts where a visual illustration was shown; the lights coming up, players moving with the basketball, logos of the two teams, Indiana Pacers and Sacremento Kings, who are set to participate in the NBA India Games and even visuals from NBA matches, as music played in the background. Interestingly, the initiative has also come up with an interesting hashtag #NBAInMyBackhard. The visitors to the Gateway of India were surprised and started clicking photos and recording videos of the visual delight.

The NBA India Games had recently made headlines when President of the United States Donald Trump had referred to it as a sign of the growing Indo-USA relations when Prime Minister Narendra Modi visited America. Trump said, "Very soon India will have to access to another world-class American product-NBA basketball. Wow, sounds good. That sounds good. Next week thousands of people will gather in Mumbai to watch the first-ever NBA basketball game in India."

" Am I invited Mr. Prime Minister? I may come, be careful I may come," Donald Trump had said then.

Indiana Pacers and Sacremento Kings are set to take on each other at the National Sports Club of India (NSCI) on October 4 and 5. The tickets can be booked on Book My Show and some other platforms. As per reports, tickets are priced from Rs 4500 to 85,000.