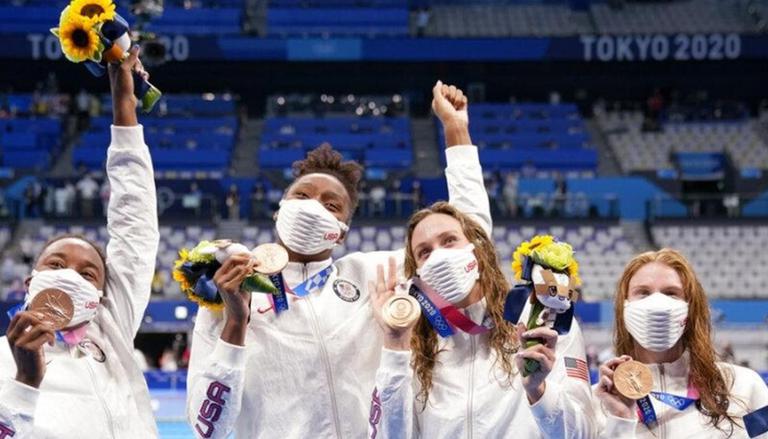 
USA's swimming team is grabbing a lot of attention but not just for their performance rather for a mask at the Tokyo Olympics. Inspired by the popular Japanese culture of 'Origami', these USA swimming team face mask raised a lot of hilarious opinions on social media. These masks are manufactured by Nike and will soon be available for sale in the brand's official website

Is it Bane? No. It's @TeamUSA #Swimming #Tokyo2020 | #UnitedByEmotion | #StrongerTogether | #Olympics

People on Twitter couldn’t help but notice that the masks the athletes were sporting look similar to the facial apparatus sported by Batman’s enemy Bane and the American psychological horror-thriller television series, Hannibal.

Team USA masks for the podium look like the medalists are about to close off Gotham’s bridges and become allies with darkness #Olympics #USA pic.twitter.com/ppQ5zzWN0W

Can you buy this unique mask?

Nike has provided Team USA athletes with the "performance masks," which will soon be available to buy on Nike's website.
"The unique origami-inspired pleated design allows for optimal airflow and air volume within the lightweight, mesh mask," the company said in a statement. "Nike Venturer is not intended for use as Personal Protective Equipment, nor is it meant to be a medical face mask or surgical mask." Athletes are required to wear them at all Olympic venues indoors and outdoors in Tokyo, including medal ceremonies, the International Olympic Committee said Sunday, according to an agency. However, they can take them off in order to take pictures.

IOC spokesman iterates on the importance of masks

Team USA entered the arena wearing face masks on day two of the Tokyo 2020 Olympic Games at Ariake Gymnastics Centre.
"It's not nice to have. It's a must to have," IOC spokesman Mark Adams said about masks.
"No, there is no relaxation and we would urge and ask everyone to obey the rules," Adams said. "It's important for the sports, for everyone involved and for our Japanese friends and it would send a strong message."