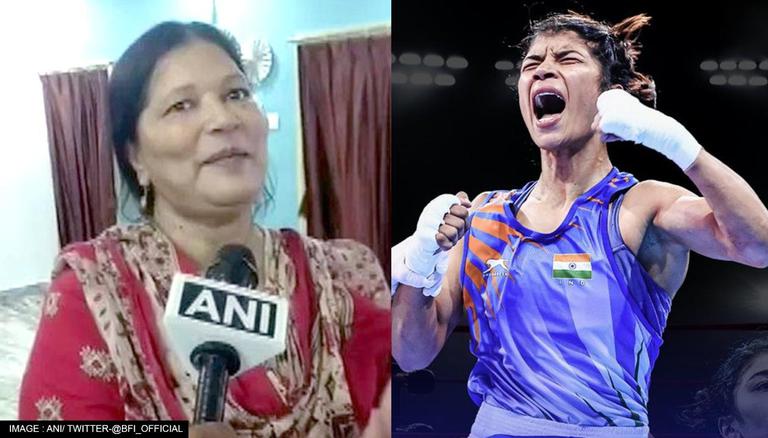 
After Nikhat Zareen created history by becoming the fifth Indian woman to win gold at the Women's World Boxing Championship, her mother expressed joy over her child's victory, stating that she can't express her happiness. Nikhat's mother further said that she hopes that her daughter wins a Gold medal in Olympics as well

Speaking to ANI, Nikhat's mother Parveen Sultana said, "It is a matter of extreme joy. Can't express my happiness. She defeated everyone with a score of 5:0, and today she has won gold. I am very happy. She is the first boxer from Telangana, that too a girl, who has brought gold back home. It is a matter of pride. I hope she will get gold in the Olympics too."

India's top female boxer Nikhat Zareen scripted history on Thursday by registering an emphatic 5-0 victory over Jitpong Jutamas to become only the fifth Indian woman to win gold at the Women's World Boxing Championship. She defeated her Thai counterpart in the flyweight (52 kg) category in Istanbul on May 19. Nikhat Zareen was utterly dominant against Jitpong Jutamas as she out-punched her Thai opponent to claim an outstanding unanimous 5-0 verdict. As a result of her monumental victory, she joins the elite list of six-time champions Mary Kom (2002, 2005, 2006, 2008, 2010 and 2018), Sarita Devi (2006), Jenny RL (2006) and Lekha KC (2006) as the other boxers who have won the prestigious gold medal.

READ | Who is Nikhat Zareen, the Indian boxer who is turning heads at Boxing World Championships?

All you need to know about Nikhat Zareen

Nikhat Zareen was born on June 14, 1996, in the Nizamabad district of Andhra Pradesh, which is now in Telangana. She completed her primary education in Nizamabad and is currently pursuing a degree in Bachelor of Arts (BA) from the AV College in Hyderabad. Her journey into boxing began when she was inducted into the Sports Authority of India (SAI) in Vishakapatnam to train under the Dronacharya awardee, IV Rao, in 2009. Her talent in the sport was there for everyone to see as she was also declared the 'golden best boxer' at the Erode Nationals in 2010. From that point on, she has come a long way as she won the gold medal in the flyweight division of the AIBA Women's Junior and Youth World Boxing Championship before picking up a silver in the Youth World Boxing Championships in 2014. Since then she has won several medals, but none of them will mean as much as the gold medal at a Women's World Boxing Championship event.