Randy Orton took to Twitter and wrote that he was missing John Cena. At the same time, he also requested Cena about Rock's plans for Wrestlemania 36 next year.

Randy Orton, apart from being one of the biggest superstars is also a valuable asset to the WWE universe. From being remembered as babyface not too long ago, he has risen to greater heights in being recognised as top star, superstar and megastar, and the face of the company, it has been a long journey for 'The Viper'. Randy Orton, who is a third-generation superstar is a 13-time world champion. He has held the WWE Championship nine times and the now-defunct World Heavyweight Championship four times. He is the youngest World Heavyweight Champion after having won the title at the age of 24. In fact, Orton was the last wrestler to hold the World Heavyweight Championship by defeating John Cena. Speaking about John Cena, Orton remembered the 16-time world champion recently.

Randy Orton took to social media and wrote that he was missing John Cena. At the same time, 'The Apex Predator'  also requested the 'Leader of the Cenation' to ask the Rock about his plans for Wrestlemania 36 which is scheduled to be held in April 2020. Meanwhile, Orton had also posted a picture of posing with a couple of life-sized cardboard cutouts of Cena. Take a look. 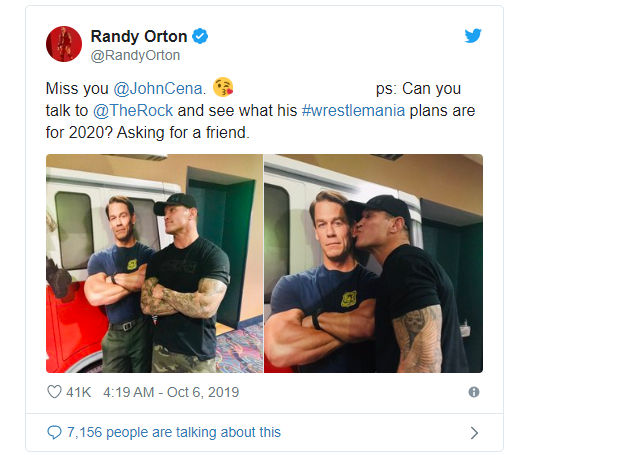 Back in 2004, The Rock made his return to WWE and got into a verbal fight with Randy Orton. The Rock destroyed Orton with his trash talk and Orton who was the face of WWE back then, also received a Rock Bottom from the great one. The segment was well received by WWE fans and since then, fans are waiting for this match to happen.

Randy Orton and The Rock, both come from the family of wrestlers, who have won many titles in WWE. However, both the 'Viper' and 'The People's Champion' have never had a one-on-one contest so far and there is no doubt that the new generation audience would love to see this match-up what the 'Ruthless Aggression Era' fans could not. The names of The Rock and Randy Orton are enough to sell tickets and when fans hear that both the wrestlers will face each other at WrestleMania, they will go into a frenzy. When The Rock faced John Cena in a dream match at WrestleMania 28, sales of the show broke records. So, The Rock coming back to WrestleMania is always good for WWE business. Orton knows that this is the pump his career needs and he is trying everything he could to stir things up.

READ | Brock Lesnar to Bobby Lashley, wrestlers who have excelled outside WWE