Tokyo Olympics 'Anti-Sex' beds are designed in such a way that they will be able to take the weight of one person and can break by major movement. 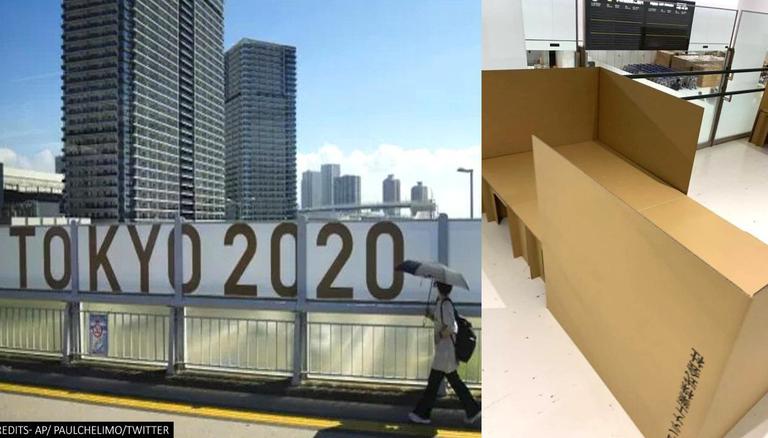 
The upcoming Tokyo Olympics is just a couple of days away and the organisers are trying their best to make sure that the games are conducted without more COVID-19 trouble. In their latest effort to avoid an increase in the number of COVID-19 cases, the organisers have come up with a plan to keep athletes from getting closer to each other. On Sunday, the Games Organising Committee announced that three athletes have been tested positive for COVID-19 with two of them staying at the Olympic Village. The latest development has now added more doubt around the trouble which gets underway from July 23.

American athlete and 2016 Olympic medallist Paul Chelimo shared a picture of Anti Sex beds which will is being installed at the Tokyo Games Village. The Anti-Sex beds been made out of cardboard to avoid intimacy between athletes. He wrote that the beds are designed in such a way that they will be able to take the weight of one person.  The cardboard-made recyclable beds are likely to break if under any major movement.

Beds to be installed in Tokyo Olympic Village will be made of cardboard, this is aimed at avoiding intimacy among athletes

Beds will be able to withstand the weight of a single person to avoid situations beyond sports.

I see no problem for distance runners,even 4 of us can do😂 pic.twitter.com/J45wlxgtSo

Ahead of the games, The International Olympic Committee (IOC) has plans to distribute over 160,000 free condoms to the 11,000-odd athletes taking part in the Tokyo Olympics. However, the athletes have been advised to not put themselves in a position where they'd need to be used. The athletes are expected to take the condoms back with them after the conclusion of the Tokyo Olympics as a souvenir.

The rulebook states that athletes will not be subject to quarantine on their arrival in Japan and permits them to access training camps before the commencement of the Olympics. The rulebook mandated the athletes to test negative for COVID-19 while boarding their flights to Japan and asked them to take another test upon their arrival. Further, athletes are restricted from visiting tourist spots, shops, restaurants or bars and are directed to wear masks at all times except while competing, training, eating, or resting.