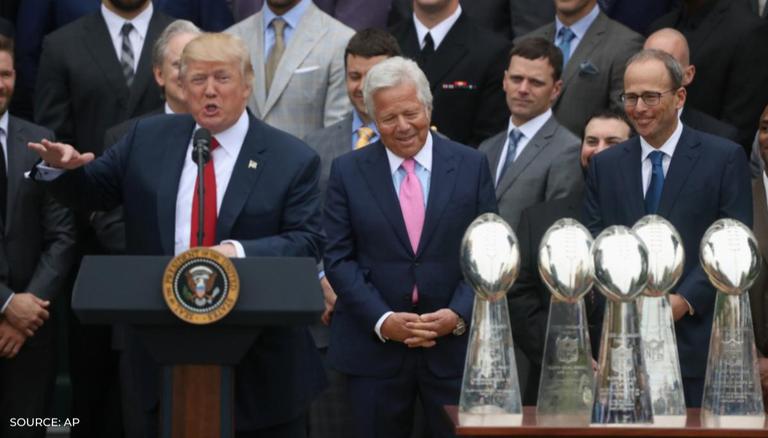 The New England Patriots Spygate scandal has become the talk of the town on social media. On Wednesday, Patriots owner Robert Kraft denied allegations that he and Donald Trump attempted to pay a US senator money in order to drop an investigation into a cheating scandal involving the team. However, netizens have now been curious to know more about the Patriots Spygate scandal, which involved former US president Trump.

In 2007, the New England Patriots were caught videotaping the defensive signals of the New York Jets from an unauthorised area of the old Meadowlands Stadium. Three days later the NFL stripped the Pats of a first-round draft pick and fined the team and head coach Bill Belichick. However, within a week, the NFL said it had destroyed all evidence and deemed the case closed.

This led to critics arguing the investigation was rushed and didn’t adequately look into any prior acts, including previous Super Bowl triumphs. That group included Specter, a longtime critic of the NFL, who by February 2008 began an investigation and threatened to bring NFL commissioner Roger Goodell in front of Congress to testify. The investigation eventually went nowhere as Specter lost a primary election in 2010 and died two years later due to complications from non-Hodgkin lymphoma.

An ESPN investigation found that U.S. Senator Arlen Specter was offered campaign cash to stop his probe of the Patriots' Spygate scandal in 2008.

According to Specter's son, the man offering was Donald Trump, who was acting on behalf of Robert Kraft: https://t.co/flCoi78e9U

According to reports from ESPN this week, Donald Trump met with late senator Arlen Specter in 2008 and offered him “money in Palm Beach” if he dropped his investigation into the Spygate scandal, in which the Patriots were disciplined by the NFL for filming a rival team’s coaching signals. Trump, who had not started his political career at the time, was well-known as the star of the reality show 'The Apprentice'. ESPN says Trump was acting on behalf of Kraft, a claim those close to the former president and the team deny.

A spokesman for the Patriots also denied the allegations to ESPN. “Mr Kraft is not aware of any involvement of Trump on this topic and he did not have any other engagement with Specter or his staff,” the spokesman said via email.

In an autobiography published in 2012, Specter wrote that: “On the signal stealing, a mutual friend had told me that 'if I laid off the Patriots, there'd be a lot of money in Palm Beach.' And I replied, 'I couldn't care less.’” In the book, Specter didn’t identify the “mutual friend” although records show he had dinner about that time with Trump at Trump’s Palm Beach social club, Mar-a-Lago.