What happened to JaMarcus Russell? The Raiders' first pick in the 2007 NFL Draft had a dramatic fall from grace and played only 31 NFL games. 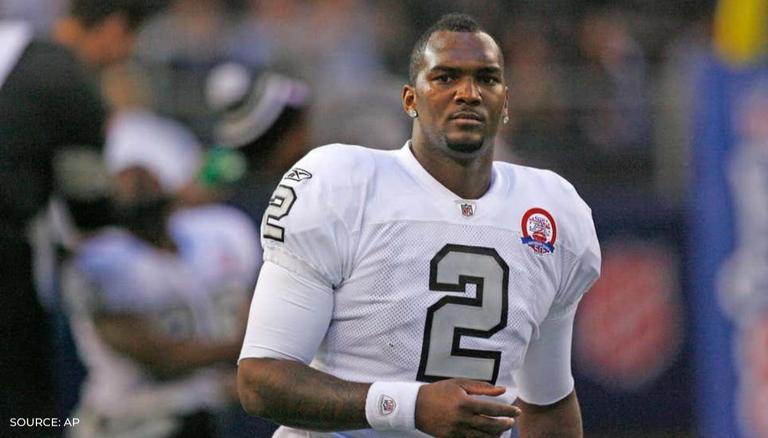 With the 2021 NFL Draft on everyone's mind, Trevor Lawrence has become the talk of the town on social media after the QB became the first overall pick by the Jaguars on Thursday. While netizens have been discussing the top NFL Draft picks of all time, JaMarcus Russell's name was also brought up as he became the Oakland Raiders' first overall in the 2007 NFL Draft. Here's a look back at how Russell went from being a top overall pick to an NFL bust in a matter of just three seasons.

What happened to JaMarcus Russell?

JaMarcus Russell was tipped as one of the most promising quarterbacks when he played at Louisiana State University. In 2006, Russell was the starting quarterback at LSU, beating out Matt Flynn and highly-touted freshman Ryan Perrilloux. He had a productive 2006 regular season, leading the Tigers to a 10–2 record and a BCS Sugar Bowl berth.

Russell threw for 3,129 yards, 28 touchdowns and eight interceptions and was second in the SEC with 2,923 yards from scrimmage. Russell also won the SEC Offensive Player of the Week award three times during the regular season. The following year, he was the first overall pick by the Oakland Raiders in the 2007 NFL Draft.

After being drafted by Oakland, Russell immediately incited conflict by engaging in a contract holdout until the second week of the 2007 season. He finally signed a six-year contract worth up to $68 million, with $31.5 million guaranteed. However, Russell's tenure with the Raiders would be defined by inconsistent play and questions over his work ethic, leading to his release in 2010.

READ | The Latest: Cleveland steps up as newest host of NFL draft

Where is JaMarcus Russell now?

Following his release from Oakland, Russell garnered interest from the Saints, Bears and the Washington Football Team but was not signed. It was reported that the teams were concerned about his work ethic. In April 2016, Russell told Sports Illustrated that he had written letters to all 32 NFL teams asking for a tryout and pledging to play one year for free, although no team responded to the letters. Since 2018, Russell has spent the last few years as the quarterback's coach at Williamson High School, his alma mater in Alabama.

Russell played a total of only 31 games in the NFL, starting 25 times. However, he was turnover prone, throwing 23 interceptions and fumbling 25 times. The writing was on the wall for Russell when the Raiders traded for Jason Campbell before the 2010 season. Russell finished with a career passer rating of 65.2.

According to reports from Celebrity Net Worth, JaMarcus Russell is still worth a whopping $4 million. Although his career in the NFL wound up being very short-lived, Russell earned a total of $40 million from salary and endorsements.

Disclaimer: The aforementioned net worth information is sourced from various websites and media reports. The website does not guarantee a 100% accuracy of the figures.