Lando Norris aroused eyeballs on the internet as he revealed his romantic relationship for the first time by sharing a picture with Luisinha Oliveira. 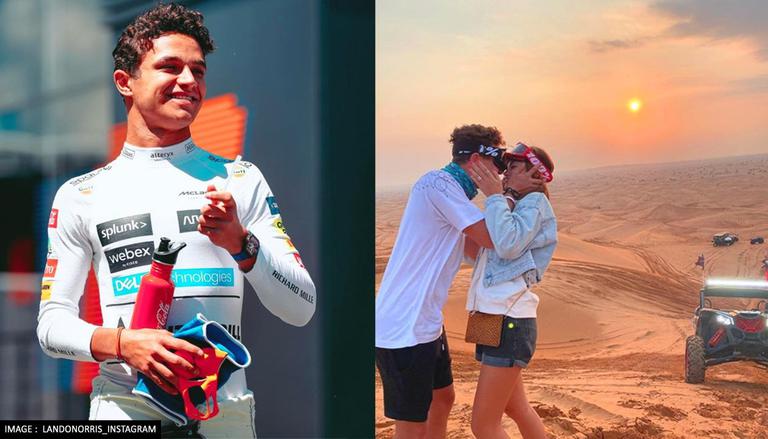 
It is off-season but Formula 1 still has things to rejoice as their favourite drivers have been sharing glimpses of their life off track via social media. In such a major update, McLaren star Lando Norris on Tuesday confirmed his relationship with Luisinha Oliveira on Instagram. The young British racer posted pictures from their vacation in Dubai.

Lando Norris aroused eyeballs on the internet as he revealed his romantic relationship for the first time. Sharing an adorable picture with Luisinha Oliveira, showcasing their intimacy, the British racer wrote, “My sunshine” in the caption. The post has since taken over the internet as F1 fans took to the comments to shower love for the couple and share the same.

The post, which has since gone viral with over a million likes, picked up pace when Norris' ex-teammate at McLaren and Ferrari, racer Carlos Sainz, also joined the crowd in the comments. The racer's best friend in F1, commented, "It’s official" on the post, confirming the obvious.

Luisinha Oliveira is a 22-year-old Portuguese model. The duo has been dating for some time now, however, Tuesday was the first time Norris revealed the same. Following the post, several fans of the 22-year-old racer dug up photos of the model and have since been sharing the same.

Many even shared the images to state that the duo was perfect for each other. While Norris’ Instagram post got the attention of his 4.6 million fans on his account, Oliveira is yet to share the same or post a picture with him. The young model, however, has shared several stories of herself in Dubai in recent days.

The F1 Grand Prix 2021 season ended in a dramatic and controversial fashion with Max Verstappen winning his maiden F1 Drivers World Championship. The Red Bull driver beat Lewis Hamilton at Abu Dhabi GP to win the crown and deny Lewis Hamilton his eighth F1 title. The Hamilton vs Verstappen rivalry will only get intense when the next season gets underway. However, despite the drivers being on a break, fans seem to be holding on to the controversy and are now trying to take things into their own hands.

READ | What is Michael Masi's role as F1 race director? When did he take over the job?

Way before the rivalry begins yet again next season, a report has emerged regarding a petition being signed to crown Sir Lewis Hamilton as the F1 2021 World Champion. According to a report published by formula1news.co.uk, the petition to make Lewis Hamilton the 2021 F1 Champion has so far garnered 55,000 signatures. The petition was raised by people after the highly controversial 2021 F1 Abu Dhabi GP.

WE RECOMMEND
Lando Norris 'devastated' after missing out on maiden F1 win at Russian GP 2021
Sebastian Vettel praised for stopping near Lando Norris' crash site to check if he is fine
Lando Norris contract: How much will the McLaren racer earn after signing multi-year deal?
Nico Rosberg picks 21-year-old Lando Norris as 'future Formula one world champion'
Carlos Sainz engages in funny banter with Lando Norris; discusses his 'by a mile' golf win
Listen to the latest songs, only on JioSaavn.com