Who is Mikayla Demaiter? The former ice hockey goalkeeper hung up her gloves last year at the age of 19 in order to dedicate her life to modelling. 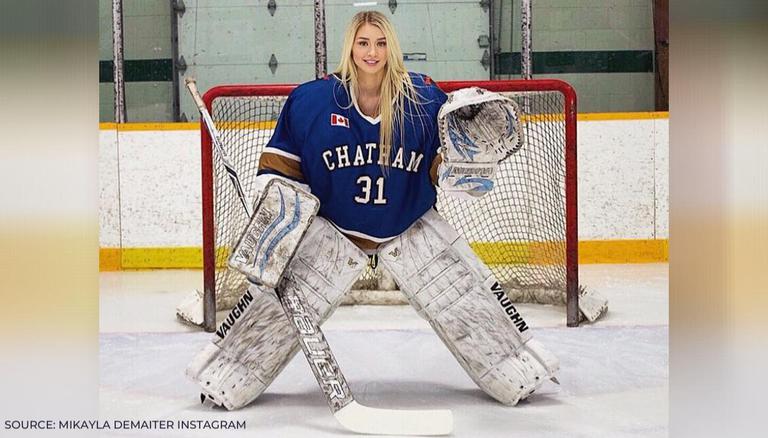 Mikayla Demaiter has become the talk of the town on social media due to her stunning pictures on Instagram. The 20-year-old Canadian initially pursued a career as a professional ice hockey player but decided to quit the sport in order to dedicate her life to modelling. Demaiter now has over 413,000 followers on Instagram and has been drawing plenty of attention with her captivating pictures.

Who is Mikayla Demaiter? Canadian ice hockey starlet opts to pursue career as a model

Demaiter grew up in Woodbridge, a suburb of Toronto, Canada and as a youngster, had a vested interest in ice hockey and boating. At a tender age itself, she joined the Bluewater Hawks in the Provincial Women's Hockey League. She played as a goalkeeper for the Hawks for a few years before eventually deciding to quit the sport.

ALSO READ: Changing On The Fly: College Hockey Teams Do It On, Off Ice

Last year, in June, Demaiter took to Instagram to reveal that she had decided to 'say goodbye' to ice hockey at the age of 19. Although Demaiter's retirement came as a surprise to many, reports from the Morning Bulletin suggested that Demaiter opted to retire from the sport after she was forced to undergo a knee surgery. Unfortunately, not much is known about her hockey career stats prior to her making a switch to modelling on Instagram.

In a heartfelt post, Demaiter wrote, "It is time to say goodbye to ice hockey. It is time to turn the page and move to the next chapter of my life, for the first time you will not be my number one focus. I am excited about the future because everything you have taught me will allow me to succeed. There will still be early mornings, new adventures and new friends, and I hope that I embrace them with the same love and passion I did for you."

Soon after hanging up her gloves, Demaiter decided to dedicate herself entirely to the world of fashion. Over the past year or so, the photogenic Canadian regularly provides her 413K followers with jaw-dropping pictures of herself. Demaiter has sent her fans into a frenzy with snaps of herself in the gym, in swimming pools and on the beach.

By her physique, it's quite apparent that Demaiter regularly visits the gym. However, her IG bio still reads, "Hockey goalie. Canadian". It is believed that while she was still playing ice hockey, Demaiter was labelled as the 'sexiest goalkeeper' in the sport.