Who Is Neeraj Chopra's Coach Uwe Hohn? All You Need To Know About Former German Athlete

As javelin thrower Neeraj Chopra scripted history by clinching gold at Tokyo Olympics, here's all you need to know about his mentor & former champion Uwe Hohn. 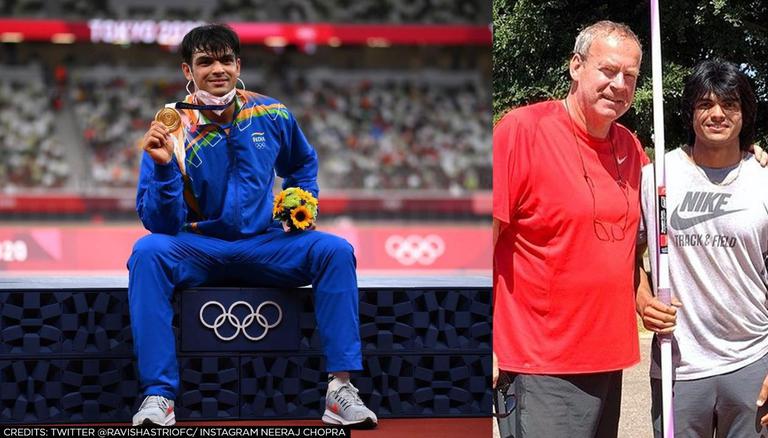 
History was rewritten by Neeraj Chopra on Saturday when he struck gold in the Tokyo Olympics 2020 men's javelin throw final. By virtue of this emphatic triumph, Neeraj Chopra won the country's seventh medal and first gold in this year's Olympic games.

At the same time, Neeraj Chopra also ended India's 13-year long wait for the prized Olympic gold medal as well. The last time a gold medal came home was back in the 2008 edition in Beijing when shooter Abhinav Bindra won the tournament's prestigious prize in the 10-meter air rifle event.

While Neeraj Chopra tried manfully from his end to reach where he is today, the journey might have gone wrong had it not been for his current coach Uwe Hohn. Without further ado, let's find out who Neeraj Chopra's mentor Uwe Hohn is.

Neeraj Chopra's current coach Uwe Hohn used to be an athletics track and field athlete who represented Germany. In fact, Uwe Hohn holds the 'eternal world record' for the highest javelin throw of 104.80m and at the same time, the German is also the only competitor in the history of the game to throw over the 100m mark. However, he had achieved this feat with an old design of javelin.

Uwe Hohn is a very accomplished personality in the javelin throw. He had won the IAAF World Cup in 1985 and prior to that had also won the European Championship in 1982.

Coming back to the contest, after six attempts in the final, Neeraj made his personal best record with an 87.58m throw and beat his opponents. The 23-year-old had registered an 87.58m throw in his second attempt itself and it remained intact throughout the contest as none of his competitors could outperform him by bettering the youngster's record on the given day.

During the medal ceremony, Neeraj Chopra stood at the top of the podium with the gold medal around his neck with immense pride as the Indian national anthem was played. Jakub Vadlejch and Vítězslav Veselý (both from the Czech Republic) won silver and bronze respectively.

Pakistan's Arshad Nadeem, who had described Chopra as his idol, finished fifth with his best throw of 84.62m. Arshad, who was at the fourth spot before his final throw was eyeing a podium finish but a forgettable throw meant that he slipped one place down to the fifth spot.