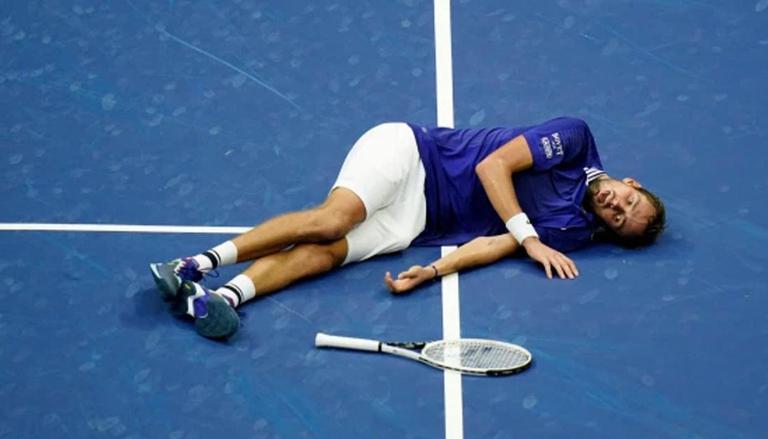 
Russian tennis player Daniil Medvedev destroyed Novak Djokovic's hopes of securing the Calendar Slam by defeating him 6-4,6-4,6-4 in straight sets at the US Open final. He avenged his Australian Open final loss to Djokovic earlier this year and kept the Serbian waiting for his record 21st Grand Slam title.

The highlight of the day was not the final between Djokovic and Medvedev but it was the latter's post-victory celebration that won the internet and was trending across various social media platforms. Medvedev did the ‘dead-fish celebration’ which the audience is finding hilarious.

During the post-match presentation, he was asked about the celebration and he said,

Medvedev won his first-ever major Grand slam of his career and his dead fish celebration is winning the hearts of many football fans. After the match, Medvedev tweeted, "Waking up this morning with so many funny messages. Let’s see the best #deadfish celebrations out there?? #fifa"

Waking up this morning with so many funny messages. Let’s see the best #deadfish celebrations out there?? #fifa

Novak Djokovic had a dream start to the year winning Australian Open, French Open and Wimbledon, and everyone was expecting him to complete Calendar Slam by winning US Open and also Gold in Tokyo Olympics. But unfortunately, it didn’t happen.

After the match, Djokovic said in the press conference,

"It’s a tough one to swallow, this loss, considering everything was on the line. But on the other hand, I felt something that I never felt in my life here in New York. The crowd made me very special. They pleasantly surprised me. I did not expect anything, but the amount of support and energy and love I got from the crowd was something that I’ll remember forever."

Djokovic currently has 20 Grand Slam titles, on par with Roger Federer and Rafael Nadal, and would be looking to go past them next year. On the other hand, Daniil Medvedev will be eyeing to maintain his form and would be eager to win a Grand Slam next year as well.

Here are some of the reactions to Daniil Medvedev's celebration

@DaniilMedwed you play by the book yesterday and well deserve it!
Djokovic was pursuing history, but you was your own history 🎾🏆

Man denies one of the greatest tennis players of all time an historic grand slam, and pulls out the dead fish/brick fall celebration from FIFA 😂

I love how Daniil Medvedev just won his first EVER Grand Slam title and proceeded to celebrate it with a FIFA celebration. He even mentioned it in his winners speech, unreal 😭 pic.twitter.com/MWjwncoMmW