Djokovic Vs Nadal Head To Head: Who Has The Upper Hand Ahead Of French Open Semi-final?

A semi-final of epic proportions awaits fans as Novak Djokovic takes on Rafael Nadal at the French Open. Here are the Djokovic vs Nadal head to head stats. 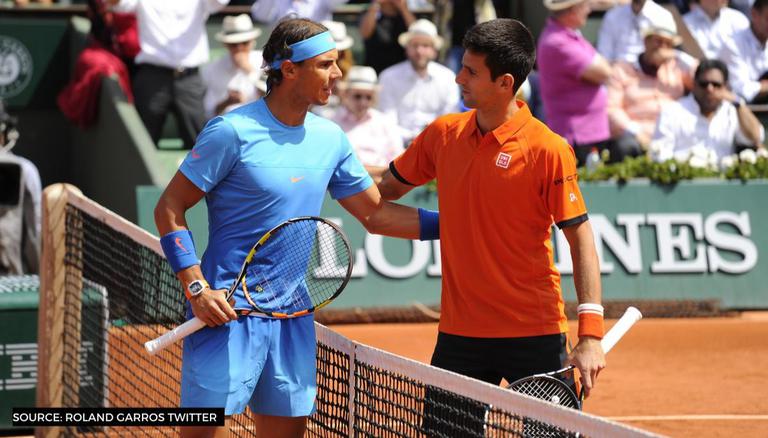 Djokovic vs Nadal head to head


A semi-final of epic proportions awaits fans as World No.1 Novak Djokovic takes on the King of Clay and World No. 3 Rafael Nadal in the Men's singles semi-finals French Open 2021. With Roger Federer falling behind after failing to carry on with his pre-2010 domination, the Rafael Nadal vs Novak Djokovic rivalry has become the focal point of the men's tour in the last decade. The duo have come away with a massive 31 of the last 44 Grand Slams and have spent all but 58 weeks (about 13 months) alternatively occupying the Men's No.1 rankings since 2010.

The Novak Djokovic vs Nadal French Open 2021 semi-final, potentially one of the most momentous matches of the season, will reignite a longtime rivalry that was only recently tested at the Italian Open. With Rafa taking that title and the one before that, at the 2020 French Open final, confidence will be running high in the Spaniard's camp. However, as one of only two men to have ever defeated the King of Clay at Roland Garros - back in the 2015 quarter-final - and looking to become the ONLY person to do that twice, Novak Djokovic will also have considerable support behind him.

With the potential for another marathon like the Australian Open final of 2012 this matchup may well be one that defines the GOAT conversation in the future. For not only will be the Djokovic vs Nadal record lead be on the line, but this match will also decide which of the players gets a chance to go into the final and make tennis history - a 21st Slam for Nadal and a double career Slam for Djokovic. While Nadal is the favourite, considering everything, expect Djokovic to put up stiff resistance on Saturday.

Who is better Nadal or Djokovic? Novak Djokovic vs Nadal head to head stats

The Djokovic vs Nadal head to head currently stands at 29-28, just slightly in favour of the Serbian. As is expected, both players dominate over each other on their surfaces of choice - with Novak Djokovic holding a massive 20-7 advantage on hard courts and Nadal having won 19 of 26 meetings against the Serb on clay. The pair stand at an equal 2-2 on Grass Courts. The Djokovic vs Nadal record is set to get even more interesting as they play out their final years on the tour and look to finish as the GOATs.

With 36 Masters 1000 titles each and Djokovic holding 18 Grand Slam titles compared to the Nadal Grand Slams tally of 20, the two legends are barely distinguishable in any area of the game. Rafa currently leads the pair in ATP 500 titles, with 22 to Djokovic's 14. However, the World No.1 catches up when you take into account his 5 year-end titles and the Spaniard's zero wins in that arena. Nadal also boasts one Olympic Gold for Spain while Djokovic has a Bronze from the 2008 Beijing Olympics.

The two players are also one title each away from completing their career double Grand Slams - Djokovic needs another French Open title while Nadal needs an Australian Open win to get to his legendary milestone. Notably, both tournaments the players need to win to this milestone are established dominions of the other player, with Djokovic reigning supreme in Melbourne with 9 wins and Nadal ruling Paris with a mammoth 13 wins.