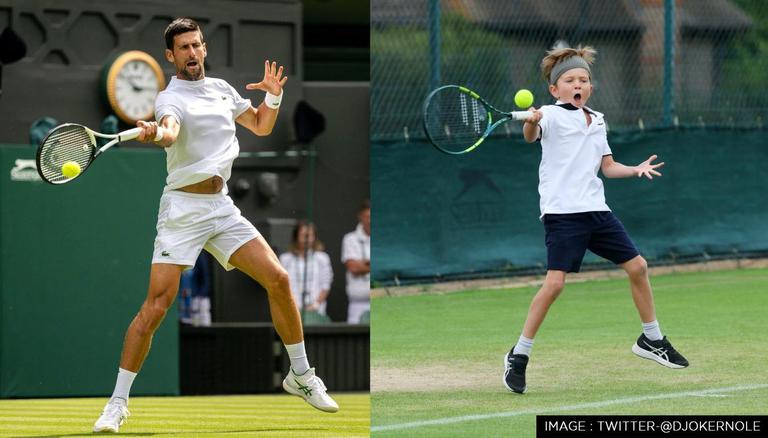 
Novak Djokovic's bid for the seventh Wimbledon Championship continues after the Serbian sailed into Round 3 and will now face compatriot Miomir Kecmanovic. Ahead of the Round 3 clash, the Serbian posted an image of him and Son playing forehand strokes which looked similar to each other. Djokovic is currently aiming to win his fourth successive Wimbledon title.

Novak Djokovic captioned the image 'So cool to see this' tagging his wife Jelena Djokovic. Both the father and son were spotted hitting balls during practice sessions alongside Novak Djokovic's coach and former Wimbledon champion Goran Ivanisevic. In the video, the 35-year-old Djokovic is seen moving Stefan around the court after the youngster advances into the net.

Novak Djokovic is yet to win any Grand Slam title this year after failing to defend his Australian Open and French Open titles. However, Wimbledon will be Serbian's last opportunity at Grand Slam success with doubts over US Open participation following his vaccine stance. Djokovic has won six Wimbledon titles and is looking to equal Pete Sampras' record of seven titles. However, the lack of match practice ahead of the grass-court event will be a major concern but the Serbian has looked good so far. Recently the Serb became the only player to have won 80 matches or more in all the Grand Slam tournaments following his first round at Wimbledon.

Speaking of the achievement Djokovic said, “At this stage of my career, I try to play my best tennis at the Grand Slams and really deliver on the most significant courts in history. Now that we have gotten to 80 [wins at Wimbledon], let’s get to a 100. This sport has given me everything. I owe a lot to this sport and I love it still with all my heart. I have a lot of passion for it and I am as dedicated as anybody out there. I am not one of the youngsters anymore and a lot of things have changed but the love and flame for this sport still burn in me. I’ve said this a few times before, but this court has always been special for me. It’s always been the court where I dreamed of playing and winning and all my childhood dreams came true on this court,”

READ | Novak Djokovic faces fresh controversy over COVID jab as sparring partner tests positive
READ | How could Novak Djokovic drop to lowly 7th in ATP rankings even if he wins Wimbledon 2022?
SUBSCRIBE TO US