Novak Djokovic's Son Beats Him In Cute Rally On Court In Mallorca: WATCH

After his surprise finals run at the Mallorca Open 2021 doubles event ended, World No. 1 Novak Djokovic found a hitting partner unlike any other on the tour. 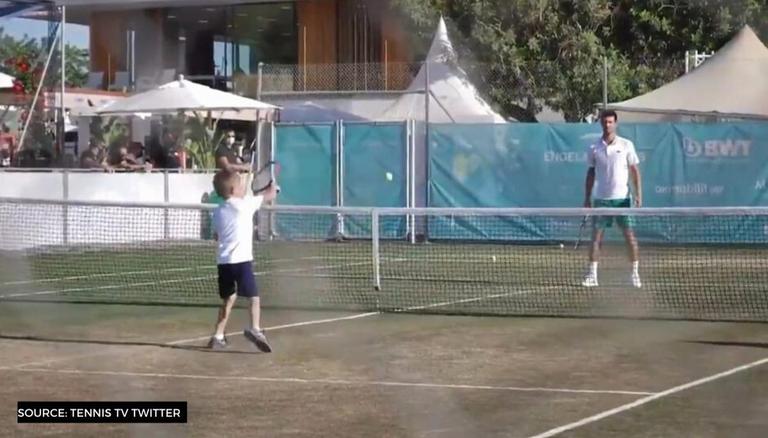 
After his surprise finals run at the Mallorca Open 2021 men's doubles event ended with an injury to Spanish partner, Carlos Gómez-Herrera, World No. 1 Novak Djokovic found a hitting partner unlike any other on the tour. All set to make his return at the Wimbledon 2021 Championships - where he will be defending the title he won in 2019 - Djokovic chose to put his skills to the test against someone he has personally trained - his son, Stefan. After a hectic and rollercoaster clay-court season saw him miss out on some much-needed family time, the Serb flew home and celebrate his French Open win and recharge his batteries.

An adorable sight graced the practice courts at the Mallorca Country Club as Novak Djokovic took to the middle for a practice session with his 6-year-old son, Stefan. Born in 2014, the young boy has been a major presence in the World No. 1's tours, making appearances on court wherever tournament rules allowed him to and practising backstage with his father when on tour with him. In their latest video, the duo can be seen playing a rather serious game of tennis, as onlookers watched on. Armed with a very impressive looking set of forehands and backhands Stefan also seemed to be emulating his father's smash shot.

After receiving a little encouragement and a quick lesson on FH grips - a lesson many would pay anything for - the six-year-old made quick work of the World No. 1, beating him with a cute little backhand. Talking about his pre-Wimbledon 2021 prep and how he has used this period to spend some time with his family, Djokovic said "I came here [to Mallorca] a week before Wimbledon because I wanted to spend time with my son, with my family. Once you are in London, you are in lockdown, so you cannot really move much. We are enjoying it, we are very grateful to be here”.

He also added how much he was enjoying the fact that his son was starting to get a grasp on tennis and what it is he does for a living. “Now he was very inspired to come and play on grass. For him, it was a new experience, and he likes it a lot, he likes to dive and so forth. He was watching my practice, and picking up balls and in the breaks, he was playing as well, with me, my brother, with my coach. It’s amazing, you know".

Heading into the Wimbledon 2021 Championships, Novak Djokovic will be aiming to become the third man, after Rafael Nadal and Roger Federer to win 20 Grand Slam titles. Having just completed his career double Grand Slam at the French Open, the Serb will be in high spirits as he takes to the Center Court this June. With the Novak Djokovic Grand Slams count on the line and a chance to become the first man in the Open Era to win all four Grand Slams in a single year, the pressure will be on the Serb.

READ | Does Novak Djokovic have an Indian connection in his house? Picture circulates online