Sania Mirza set goals by achieving her own goal with her '89 kilos vs 63' transformation. She won hearts with Yuvraj Singh and other stars praising her.

A break of two years from one’s profession is never easy, but Sania Mirza had to put professional tennis on hiatus after giving birth to her son Izhaan. However, when the 33-year-old felt ready for a comeback, she ensured that she was at the peak of her fitness. For this, the six-time Grand Slam Champion shed 26 kilos in the span of just four months.

The tennis sensation on Monday shared her before and after snaps from ‘89 kilos vs 63’ to share how she achieved the goal of being match-fit after having a baby. Sania urged her fans and followers to take pride in their own goals, be it everyday goals or long-term goals. She encouraged them to follow their dreams, ignoring the numerous people who discourage them.

The sportsperson added that if she could achieve her goal, anyone else could do so too.

89 kilos vs 63 🙃 we all have goals.. everyday goals and long term goals .. take pride in each one of those .. it took me 4 months to achieve this goal of mine, to get back to being healthy and fit after having a baby .. feels like such a long way.to come back and regain fitness and being able to compete at the highest level again .. Follow your dreams.No matter how many ppl tell you , you can’t 😉 cause God knows how many of those we have around us 🙄😅If I can then anyone can 🙏🏽 #believe #mummahustles

Yuvraj Singh, Rakul Preet Singh, Diana Penty and many other stars lauded Sania for her amazing transformation.  Yuvraj wrote, “Uff uff mirchi’ while the actors praised her with emoticons. Punit Malhotra, Anusha Dandekar and Raageshwari were some of the other celebrities who showered praises on Sania. 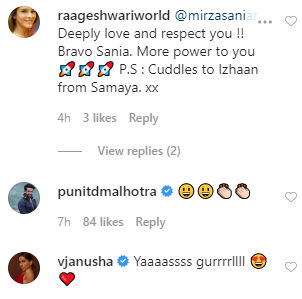 Sania made a fairytale comeback to tennis as she won the WTA Hobert International Trophy with Nadiia Kichenok. Her Grand Slam return, however, was marred by injury. She pulled out of the Australian Open mixed doubles, where she was to partner Rohan Bopanna, citing a calf strain.

Even in the women’s doubles match, she was forced to withdraw from the first round match midway, while trailing 2-6, 0-1 over the injury.