What Happened To Ronda Rousey? Why Was The WWE Star Suspended After SummerSlam?

Ronda Rousey claimed that the referee missed Liv Morgan tapping out to the Armbar while he counted the pinfall due to which she was unable to win back title. 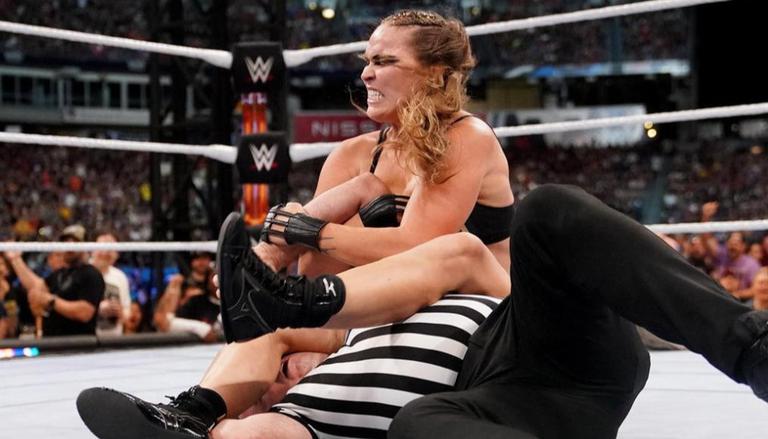 
Former WWE Smackdown women's champion Ronda Rousey was fined and suspended by WWE for her actions during the WWE Summerslam event which took place recently. WWE announced the punishment earlier today on their official page and Adam Peace made it official on his own Twitter page. Rousey faced Liv Morgan for the WWE Smackdown women's championship title at WWE SummerSlam but failed to recapture the title she lost at MITB.

Why was Ronda Rousey fined by WWE?

The suspension comes after Ronda Rousey attacked the official after her SmackDown Women’s Title Match at Summerslam, claiming that he missed Liv Morgan tapping out to the Armbar while he counted the pinfall. WWE has a rule where superstars are not allowed to put their hands on officials however Ronda Rousey was unable to hold back her suspension. WWE issued a statement on Ronda Rousey's suspension which said, "Following her attack on referee Dan Engler at SummerSlam, Ronda Rousey has been fined an undisclosed amount and will be suspended. Due to her suspension, Rousey will not appear on this week’s Friday Night SmackDown."

BREAKING: Following her attack on a WWE Official at #SummerSlam, @RondaRousey has been fined and suspended. https://t.co/6RKBL5ClDg pic.twitter.com/NyDVubzmbg

This is not the first time that Ronda Rousey was suspended was WWE. Back in  2018, Ronda Rousey WWE career hit a roadblock after being suspended for an attack on WWE officials. Rousey was so annoyed during her feud with Alexa Bliss that she assaulted her with the Money in the Bank contract. Not only Bliss but Rousey also attacked several officials and Kurt Angle, who was the General Manager of Raw at the time, which led to her being suspended.

At WWE Money in the Bank, the 28-year-old Liv Morgan cashed in her briefcase, to pin Ronda Rousey and become the new Smackdown Women's Champion. The WWE Smackdown Women's Championship was Morgan's first major title in her entire wrestling career. Th win at Summerslam was her second on Rousey. The Baddest Woman on the Planet was pinned for the first time at WrestleMania 35 during a triple threat match against Becky Lynch and Charlotte Flair. It was the first women's bout to headline The Grandest Stage of Them All.