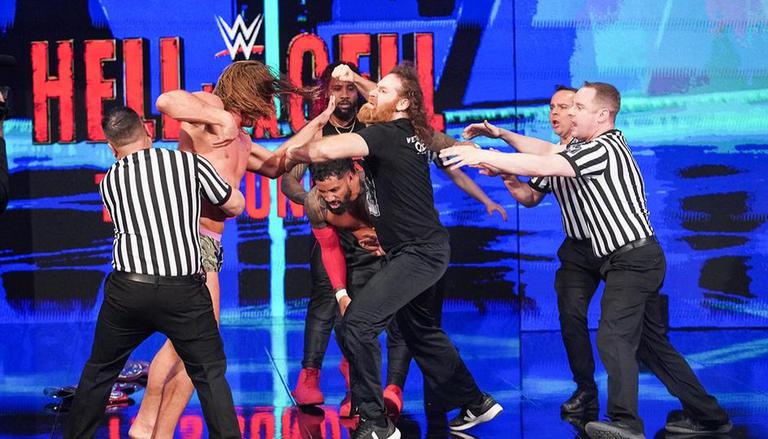 
The latest episode of WWE Smackdown witnessed Madcap Moss returning to the ring and taking on Baron Corbin. The Usos defended their unified Tag Team Tiles against Shinske Nakamura and Matt Riddle, while women superstars featured in Six-Pack Challenge to determine no 1 contender for WWE Smackdown Women's Championship. Let's look at WWE SmackDown Highlights and also the WWE Smackdown results.

The Brawling Brutes beat The New Day and Drew McIntyre

The New Day and Drew McIntyre opened the latest segment of WWE Smackdown. While New Day spoke about last week's win over the Brawling Brutes, Drew McIntyre announced that he will face Roman Reigns at Clash at Castle in the UK. However, the Brawling Brute interrupted the segment and insulted them. With Butch going on the attack, a six-man tag team match was made.

The New Day and Drew McIntyre dominated the match at the start before the Brawling Brutes took control. McIntyre fought on the sidelines before Sheamus delivered a Brogue Kick. Butch took advantage of the situation and hit the bitter ending (finishing move) on Woods to pick up win.

READ | WWE: The Undertaker dominates list of top 5 Hell in a Cell matches of all time

The match started with Aliya attacking Shotzi and sending her outside the ring. Natalya and Baszler wiped her out at ringside. Raquel Gonzalez dominated the match inside the ring but Baszler locked in the Kirifuda Clutch before Raquel rolled outside the ring. Shotzi hit a massive DDT on Shayna before Natalya took her out. Rodriguez dropped Shotzi on top of her and hit a diving corkscrew from the corner. Shayna came back in for the Kirifuda and took Raquel down to the mat before Natalya pinned her for the win.

Baron Corbin tried his best to stay out of the ring early in the match and also tried to avoid getting punched by his former friend. Moss went outside and tossed his former friend into the barricades and the ring post before the latter tried to use a steel chair. Moss then unloaded a series of steel chair shots. Madcap went back out and got the steel steps before hitting Corbin with more chair shots. Moss wrapped the chair around Corbin's neck and was about to hit him with the steel steps, only for SmackDown officials to stop him.

Both Nakamura and Riddle were looking for their revenge on The Usos as both teams fought for the title. Usos dominated the match at the start before Riddle and Nakamura slowly asserted their dominance in the match. As the atch progressed Nakamura sent Jey into the steel steps and went for Kinshasa but missed it and hurt his knee.

With Nakamura taken backstage by medics, Riddle was outnumbered in the ring with Jimmy doing the RKO taunt but took a running knee. Riddle then hit a Floating Bro on the outside of the ring before getting a power slam in the ring. Riddle set up for a top rope RKO on Jimmy USO but got distracted by Roman Reigns and Jey tagged in. Riddle hit the RKO from the top but Jey came in with a splash and picked up the win.  After the match, Riddle attacked Sami and The Usos before officials came and separated them